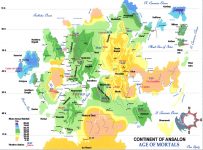 The maps below were based on data provided by the Dragonlance Nexus weather application. Based on the selection of US cities that the Nexus used for its weather application, I went to the National Weather Service website and found archived data sets for all of the cities. I then determined… Read More

The year is 435 AC, 14 years after the War of Souls. Jaymes Markham has risen to power, but the nation of Solamnia has split between two factions… Read More

A Greater Grove In the extreme east of Abanasinia, beyond the lands of the United Plainsmen Tribes, and over the Eastwall Mountains lies A Wood shrouded in mystery and intrigue. It is bordered in the north by the moss-draped trees and fetid swamp surrounding the ghostly ruins of Xak Tsaroth.… Read More

Raekel’s Pit is a terrible mark that was left upon Krynn by one of her most evil priests. Even in the Age of Mortals, it continues to fester like an open sore. Located in the southern part of the Sentinel Mountains, its true origins are shrouded in legend, but there… Read More

In ages past, Godshome referred to two locations. First, there was the widely known City of Godshome, a place with temples devoted to most of Krynn’s major gods. Second, there was a hidden valley that only those chosen by the gods could find. Located within the Khalkist Mountains near the… Read More

Located east of the Goodlund Peninsula, Claren Elian has been the object of legends since the days when Silvanesti merchant vessels were common sights in Istari harbors. A heavily forested island, it has nonetheless not been plundered by minotaurs for lumber and virtually no known exploration of it has been… Read More

A summary of the town of Crossing in the post War of Souls timeline. Read More 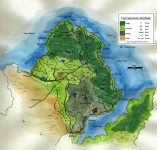 Nordmaar is one of the most mysterious places in all of Ansalon. While civilization elsewhere has rebounded since the Cataclysm, at the time of the War of the Lance, this savage peninsula remains locked in a dark age of superstition and fear. Within its dark jungles and humid swamps, players… Read More

Traveler’s Report on Gunthar (Knights of Solamnia) Author’s Note: This report is only about the area controlled by the Knights of Solamnia and should not be confused with the Mt. Nevermind article. All references to Sancrist in this document refer to the Knight controlled areas of Gunthar and have nothing… Read More

History: The town of Gateway was built in the turbulent years following the Cataclysm. It was a gathering spot for refuges as it was situated on a crossroad. As refuges flocked into the area, they began to settle in the secure location. With traffic flowing from all over the area,… Read More