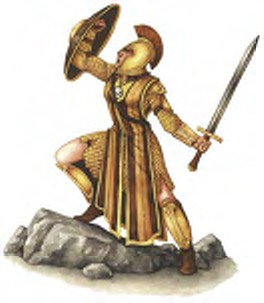 "Perhaps today is a good day to die!"

The Righteous Warlord of Kiri-Jolith is a sergeant of the line, steeled by experience in battle and braced with faith in the Sword of Justice. The Righteous Warlord fights in the trenches with his comrades, reinforcing a sense of camaraderie, obedience, brotherhood, and unswerving loyalty to the cause of Light.

Wherever a strong and just general, officer, or knight is leading his soldiers to war, there is a chance that a Righteous Warlord will be among his troops, rallying the spirit and morale of the unit. Righteous Warlords often serve as mentors and trainers, bringing the faith of Kiri-Jolith to the men and women who serve in Krynn’s armies.

Seasoned Veteran (11th Level): Whenever you use your second wind, you gain a +1 bonus to attack rolls until the end of your next turn.

Aura of Discipline (11th Level): When you spend an action point to take an extra action, you and each ally within 10 squares gains a +2 bonus to Will against charm, fear, and illusion until the end of your next turn.

Empower Allies (16th Level): Each ally who can see and hear you when he or she uses second wind gains a +2 bonus to all attack rolls until the end of his or her next turn. If an ally is an officer or another ranking individual, he also gains a +2 bonus to his Will defense.

You land a mighty blow, inspiring an ally to follow suit.
Encounter        Divine, Weapon
Standard Action      Melee weapon
Target: One creature
Attack: Wisdom vs. AC
Hit: 3[W] + Wisdom modifier damage, and one ally within 5 squares of you gains a power bonus to his or her next attack roll before the end of your next turn equal to your Wisdom modifier.

Your inspiring war cry rings above the tumultuous battle. Your allies surge into the fight.
Encounter        Divine
Minor Action      Close burst 5
Targets: You and each ally in burst
Effect: Until the end of your next turn, all targets gain a +2 power bonus to speed and a +1 power bonus to saving throws.

By the Bison’s Horn! Righteous Warlord of Kiri-Jolith Attack 20

This paragon path is a conversion of the Righteous Cohort of Kiri-Jolith prestige class, originally printed in Holy Orders of the Stars.