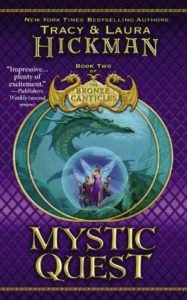 Editor’s Note: The following is a discussion taken from Tracy and Laura Hickman’s Bronze Canticles boards. I have edited the text only to have answers immediately follow questions.

Falconer GH: Since the other thread tended to focus on the rules set variant that will be used, I thought I would start a separate thread to discuss other aspects, and expand on my thoughts which I briefly mentioned elsewhere already.

So, leaving rules aside, I think a great way to go as far as actually what books should be published in the series would be to model it, in a way, after the DL series.

Ways in which the DL series should NOT be emulated:

1) Do not have the modules parallel the novels. In other words, do not include the novel heroes as pregenerated characters in the modules. Let the modules have their own plots related to the novels and ultimately of equal magnitude, but definitely different.

Tracy Hickman: I agree although readers of the book will want to experience those same locations. One of the things that we learned early in the Dragonlance experience is that books are about characters while modules are about setting. It is analogous to the difference between actors and scenery. You would not want the scenery to dictate character’s lines in the play nor would you want to paint lines for the play on the scenery. We got better at understanding this as the series progressed but still were tied to the plot lines of the book. In Bronze Canticles, however, we have the design room to allow for the same overarching objective plot to be used as a structural touchstone yet develop a separate subjective plotline that is different from the books.

Falconer GH: 2) Let each module *truly* stand alone and not be dependent on a “linear” plot connecting them. Let them be played in virtually any order, as the levels of the PCs in the campaign allow, and let the GM tailor the series to his needs. Still, arch-villains and themes can resurface to ever-increasing effect and take on new meaning.

Tracy Hickman: This addresses the perennial question of linear, open and matrix design in RPGs.

Linear designs are A-B-C — a set path between events that has no branching. This is a great structure for evaluation (such as tournaments) so that you can determine between groups who goes further. It makes for easy establishment of plot flow and direction but the cost is leading players from event to event by the nose and taking away any power of their decisions. Taken on the whole, the entire collection of modules for Dragonlance would be seen in this light (you have to play DL1 and then play DL2).

Open designs are A in the middle with a radiating web of choices in every direction. This is a great structure for campaigns and gives the players unlimited power in their decisions. The cost is (1) it geometrically increases the amount of design work required — most of which will go completely unused as you can design an entire setting to the east of the players and they steadfastly go west and (2) it provides no structure for plot flow or direction.

The third structure we developed for the individual modules of Dragonlance which we called ‘closed matrix.’ In this structure you start at A and may choose B path, C path or D path. The area of the game was seen as the stage on which the characters performed but where they went on that stage was entirely up to them. The events were then designed to give direction and flow to the story — you meet someone who gives you clues as to where to go next. The boundaries of this stage were first soft (gentle direction back toward the center of the design) and then hard (impassable walls bounding the players back into the field of play). The individual adventures of the Dragonlance series (at least in the later modules after DL8 ) followed this philosophy.

My inclination now would be to apply the ‘Closed Matrix’ structure both to individual adventures and to the adventure series as a whole, allowing the players to bound around inside an ever increasing field of play as the patchwork of adventures expanded. Thus, crossing a geographical boundary might also, inadvertently, cross you from one adventure matrix to another.

It is a sad fact that much of what we learned in game design in the Dragonlance series has been lost in subsequent design generations.

Falconer GH: 3) If desired, include pregenerated PCs as *examples* of heroes typical to the Bronze Canticles world, and/or as quick play options; but still encourage players to create their own characters and write the modules accordingly.

Falconer GH: Ways in which the DL series *should* be emulated:

1) Let the story be *about* the PCs as much as in the DL series. The traditional criticism of the Forgotten Realms is the plethora of powerful and heroic NPCs, so that PCs often feel like poor bystanders (“We were there with Elminster at his great but inconclusive showdown against the Zhents!” “We met Drizzt!”), or mere agents of the “real heroes” for minor quests. Not so in Dragonlance (or in Greyhawk, to be fair), where even at lower levels there is nothing insignificant about the threats they face; there is nothing standing between them and a very evil fate for all who rely on them, and nobody to bail them out if they fail.

The PCs aren’t nobodies, either, without grounding in the world. Two are related to an archvillainess. One is a Knight of Solamnia… Relationships like this can be easily suggested in the modules without directly imposing it on players by prescribing the whole PC.

Tracy Hickman: I am glad to report that the general overall structure of Bronze Canticles supports this concept. Society as a whole is dealing with a problem of cosmic scope in this story, thus everyone is affected and can affect global events.

2) Let it be modules. Yes! Call them Area Sourcebooks if you think it will sell better, but that’s what the really old modules were, anyway: a map of a town or keep, a map of the surrounding wilderness, and the map of a ruin or castle or other “dungeon”; all three maps encompassing many interesting and exciting possibilities. Subsequent modules can move on to other areas altogether, or add locales and ideas to the existing area. Originality is called for (but I’ve never known Tracy to be lacking in that!), but definitely above all Adventure and Storytelling!

The first module can introduce the unique races and magic, and after that add things as they come up (monsters, for example). DL was really successful with this. Even before DLA came out and summed it all up, DL1-14 mostly captured the whole of Ansalon through adventure (and small sourcebooks–DL5 and the second half of DL14). More, by numbering them and calling them a series, they become collectible (there’s business sense–collect the whole series!). Even better, keep it open ended: don’t say “there will be a total of 12”. Write as many as you feel like, and stop, and come back when you feel like.

Tracy Hickman: I heartily agree! I think given the adventure structures I’ve mentioned above, defining the world through modules (adventures as source book) is more powerful. It is like the old saying about writing: don’t tell me … SHOW me. One of the great things about Bronze Canticles is that we are revealing the world through the character’s eyes, discovering it along with them. RPG players should feel the same … that there is always something new over the horizon.

When do we start?

Dragonlance originators Tracy and Laura Hickman have been publishing game designs and stories together for over thirty-two years - nearly as long as their marriage - and thus started them both on a life of adventure and imagination. Tracy is a New York Times best-selling co-author (with Margaret Weis) of many Dragonlance novels including the original "Dragonlance Chronicles", "Dragonlance Legends", "Rose of the Prophet" and "Darksword" trilogies as well as the seven-book "Deathgate Cycle". Tracy and Laura are remembered together for their role-playing game designs in "Dragonlance" and the "Oasis of the White Palm" series but are perhaps best known for their classic adventure, the original "Ravenloft." For more information on Tracy, visit his website at http://www.trhickman.com/.
View all posts by Tracy Hickman →
Bookmark the permalink.