Towers of High Sorcery – A Discussion 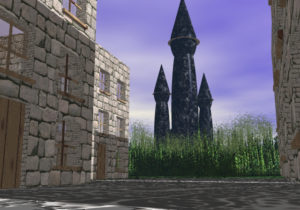 “The Tower of High Sorcery in Palanthas”, by Ray Morris

Sources tell us that five Towers of High Sorcery were built, but is this true? The Towers could not have been built at the same time, since the origin of Sorcery lies back in the days of Silvanos when Wild Magic came with the Greystone and brought Dragons back to Krynn. By taming the magic, the First Three were able to defeat the Dragons who needed magic to survive.

Four of the Five Towers are commonly given as Wayreth, Palanthus, Daltigoth, Istar. The fifth is given variously as having existed in Karthay or The Ruins. However, the formation of the Orders pre-dates the Empire of Ergoth, let alone Palanthus and Istar. It seems more likely that after the Citadel became the Lost Citadel, only one Tower was originally built. Of the properties commonly ascribed to the Towers, Wayreth is most similar to the Lost Citadel, existing in many places and none, existing half in the world and half out. Thus it would seem that the last of the Towers of High Sorcery was also the first.

The other Towers were built in the capital cities of successive regimes, first Daltigoth, then Palanthus and finally Istar. Or were they? One must not forget the ability of the Wayreth Tower to be in many places at once. Was there really only just the one Tower, which manifested itself on a permanent (as long as the Orders wished it perhaps) basis in the world’s capitals as the nations around them grew?

Examining the fate of the towers may help us to understand. It is said that due to the persecution by the Kingpriest, and to prevent their secrets falling into his hands, two of the Towers were destroyed by the mages. One was in Daltigoth, one was the mysterious fifth Tower that existed in either Karthay or The Ruins. But what if it was the same Tower in all three locations, hence the confusion? If Wayreth mirrored the Lost Citadel by existing in many places at once, why not Daltigoth?

Of the Tower of Palanthus we all know the legend. The fate of the Tower in Istar is unknown, although it is believed that Istar itself was cast into the Abyss. It may be that the Orders are able to “withdraw” a Tower’s presence from a location, in which case Istar could have been a manifestation of the surviving two Towers. It was evacuated at the same time as Palanthus and the two may be part of the same Tower. If the Istar Tower does indeed now lie in the Abyss, this could explain the terrible power of the Shoikan Grove, which can over power even a kender with fear.

So, looking at the evidence we see that there may have only been three Towers but that each existed in several places at once – one that exploded (Daltigoth, Karthay and The Ruins), one that was cursed (Istar and Palanthus) and one that survived (Wayreth). Although the evidence isn’t very strong, it does help explain why a group based around the number three would produce five of something.