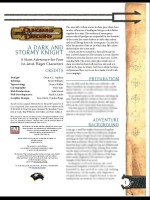 Dark and Stormy Knight is an introductory 3rd edition adventure from Wizards of the Coast that brings characters together in the Hightower, an ancient tor that holds the remains of an ancient bugbear warrior. These conversion notes are intended only to allow Dungeon Masters to play this adventure in the Dragonlance setting.

Dark and Stormy Knight is best used in the War of Souls era, but can be used in nearly any era in history.

This adventure can take place either in Northern or Southern Ergoth, off of the eastern coast of Ansalon near the Blood Sea, off the coast of the Turbidus Ocean in Solamnia, or any other coastal area where storms are prevalent. The storm could, in fact, be the Great Storm that plagued Ansalon during the War of Souls. Note that the fallen kingdom may refer to Istar.

The following adventure hooks are more specific to the Dragonlance setting and are in addition to those in the adventure itself on page 2.

The Storm-Peace sidebar on page 2 introduces a custom that may be used in Dragonlance by mariners or local nomadic humans. Minotaurs are not as likely to honor this tradition, nor would characters who follow Zeboim. Followers of Habbakuk could also follow this tradition.

It should be noted that the Dark Knight from page 7 is not a member of the Knights of Neraka.

See table 6-5: Living Languages on page 195 of the Dragonlance Campaign Setting for other appropriate languages for the ring to have access to.