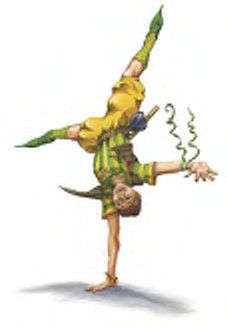 Bards of the College of Satire are jesters known and respected throughout the free lands as Goodfellows of Branchala, bringing laughter and mirth to the common folk and aristocrats alike.

Goodfellows are loyal to only one cause: the pursuit and propagation of the truth. They use their acrobatics and comedic timing to expose corruption, incompetence, and stupidity among the rich and powerful. Goodfellows serve as the conscience of a realm and are enemies of despair.

The Goodfellow of Branchala can be represented with existing tools in 5th edition. As such, a new subclass is not needed. Thematically, the Goodfellow follows the path of the bard the best. The College of Satire, introduced in the Unearthed Arcana: Kits of Old article on the Dungeons & Dragons site, represented the Goodfellow well.

It also added an extra element to the Goodfellow: the discovery of truth. Thematically, this makes for a stronger subclass. With some minor flavor text, one can easily make a 5th edition Goodfellow of Branchala.

Trampas “Dragonhelm” Whiteman is best known for co-creating and administering the Dragonlance Nexus fan site. He is co-author of three Dragonlance books – Holy Orders of the Stars, Knightly Orders of Ansalon, and Races of Ansalon. When not evangelizing Dragonlance and other settings, Trampas is a husband, father, podcaster, and web designer. Trampas also enjoys reading comics, reading fantasy and scifi novels, and playing D&D.
View all posts by Trampas "Dragonhelm" Whiteman →
Tagged  Bard, Branchala.
Bookmark the permalink.