Original design by Dale Donovan, based on the character created by R. A. Salvatore
Updated for 3rd Edition D&D by Stephen Kenson 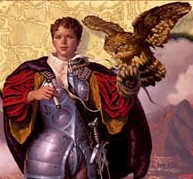 What better way to celebrate the new edition of the D&D game than by updating one of the Dragonlance setting’s newest characters? In this feature, we offer — for the first time ever — D&D stats for Linsha Majere, a Knight of the Rose created by Steve Miller in the Heroes of Defiance dramatic supplement. These updated stats let you introduce Linsha, granddaughter of Heores of the Lance Caramon and Tika Majere, as an NPC in your Dragonlance campaign. (An earlier version of the description below appeared in the Citadel of Light dramatic supplement.)

Paladin Spells (2): As a Knight of the Rose, Linsha can cast divine spells. She usually prepares divine favor, magic weapon, and resistance.

Special: As a paladin, Linsha has a number of special abilities, although she’s careful about displaying them openly. She can detect evil as a spell-like ability at will, cure up to 6 points of damage per day by touch, and remove disease (like the spell) twice per week. She is immune to all diseases and fear effects, and allies within 10 feet of her gain a +4 morale bonus on saving throws vs. fear effects. Once per day she can smite evil, gaining a +1 attack bonus and +6 to damage against an evil opponent. She can turn undead as a 4th-level cleric. Although Linsha is of a sufficient level to have a warhorse or other special mount, she has not summoned one yet; her duties prevent her from maintaining and caring for one properly. However, she does have a unique owl companion with the following stats:

Special Qualities: This awakened creature (per the druid spell) communicates telepathically with Linsha.

Possessions: In her guise as the cutpurse Lynn, Linsha normally wears leather armor and carries a shortsword and sling, along with a few meager possessions. She has a suit of custom full plate and a masterwork longsword, adorned with Solamnic emblems, stored safely at home in Solace.

Appearance: Linsha is the spitting image of her grandmother, Tika Waylan Majere, when she was young: stunning green eyes, rich auburn hair, high cheekbones, and a supple, lithe body. Slightly smaller in stature than her grandmother, she has short-cropped hair and plentiful freckles, which help her appear younger than she actually is. Although she’s nearing thirty, Linsha still can pass for a teen, which makes her even more valuable as a covert Solamnic operative. However, the first strands of gray are just starting to show in her hair.

Background: These days, most people know her as a ruthless cutpurse named Lynn, but Linsha Majere is actually a member of the Knights of Solamnia, the most honorable warriors on the face of Krynn, and grandchild of Caramon and Tika Majere, two of the Heroes of the Lance. Her parents are the wizard Palin Majere and his wife Usha.

As a child, Linsha studied with Goldmoon at the Citadel of Light, where she discovered her potential for divine spellcasting. A few years ago, she became the first woman from outside Solamnia to join the Order of the Rose. She was selected to perform a unique duty for the Order, working with a clandestine circle of Knights in Sanction to keep watch over the city’s lord, Hogan Bight, and the goings-on there. They seek out information about the Dark Knights of Takhisis and the great dragons. Recently Linsha has joined the Sanction City Guard, in order to get closer to Hogan Bight.

To carry out her duties, Linsha adopted the identity of Lynn, a greedy and unscrupulous cutpurse. Lynn has a reputation for seducing victims, then killing them in back alleys to steal their goods, although Linsha has actually killed only rarely, and never in dishonorable circumstances. Despite her disguise, she remains true to the Code and the Measure of the Knights, and to her personal code of honor.

Although Linsha is aware of the importance of her work in Sanction, she often feels that her pretense does no honor to herself, her family, or the Knighthood. She knows that her family and her superiors are proud of her and her work, but still she secretly longs for a more honorable life, where she can be a more traditional Knight like the famous Huma Dragonsbane or Riva Silvercrown, or her grandfather’s friend Sturm Brightblade. Her ongoing role as a spy rankles her and Linsha has begun to fear she will never have the opportunity to demonstrate her true abilities as a Knight.

Notes: Because of her unique role as a spy for the Knights, Linsha has a number of cross-class skills that better allow her to survive in Sanction and maintain the fiction that she is actually a rogue, despite her knightly training.

Sources: Heroes of Defiance, Citadel of Light, The Odyssey of Gilthanas, Clandestine Circle