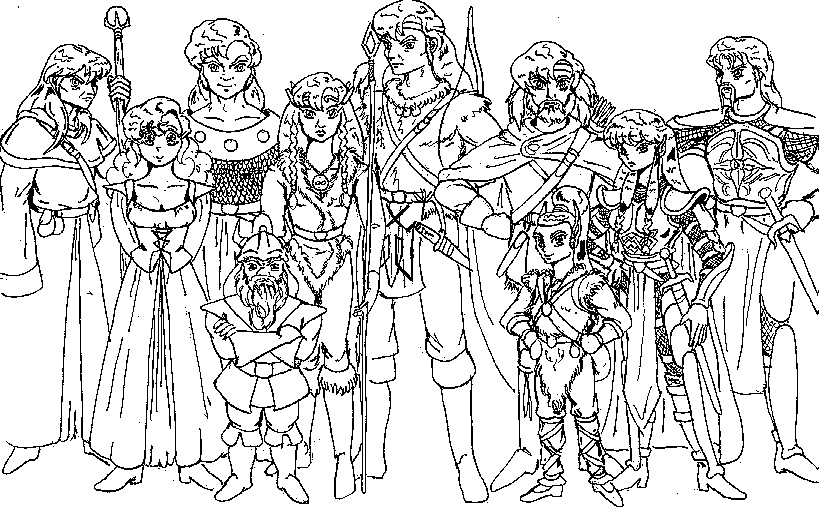 As the above graphic would suggest, I feel the American version of a DL movie is a bad idea, for many, many reasons. Most of them surround the concepts of art and handling of the story (yeah, the two most important things.) Here, then, are my reasons:

1) The art. I admit, I’ve been spoiled by watching as much anime as I do, but my point still stands. If one wants a halfway decent representation of fantasy characters, one does not go to the company that made Eek! The Cat. I heard (Maybe I’ve heard wrong, but it sounds entirely possible), that the people at TSR sent back the character design for Tasslehoff because, every time, they got him wrong. I know he’s a hard character to represent, but if I can acheive it easily in anime style, anyone can. See? And another, more personally biased point, is the backgrounds. No American artist(s) would have the necessary attention to detail to do Mount Nevermind justice (I know you don’t see it in the little snippet of story they are covering, but, still…). The dragons, too, would be mediocre, as would the bad guys. Ho hum. The point is that even bad anime is better than most American stuff out there.

2) Character handling. This goes partially with the general point of “the art.” But, more specifically, the characters themselves, probably would not be scripted the way they should be, simply because of the restrictions most American companies put on the stories. Raistlin, for example, would probably be changed, as it goes against the very grain of most American companies to have a protagonist with even a bit of darkness to him. And Kitiara would be completely left out of the story (esp since we’d only see her in flashbacks, anyway). I see a change also in Tanis, because they would want the leader to be unquestionablly decisive at all times (which Tanis isn’t), and Fizban would be written for nothing more than comic releif, ignoring whatever competence the old wizard had. In anime, however, we know that flawed heroes are not only accepted, but preferred. The same goes with any protagonist, really.

Another point with character handling would be how they would handle the gully dwarves and, theoretically, the gnomes. They would cuteify them to such an extent that any point they had in the story would be lost. Too, the gully dwarves would be waaaaaaaaay too clean. While I will not say that anime is above cuteness, in fact, it can get disgustingly cute (Case in point: C-ko. Nuff sed.), but anime artists know where to draw the line with “Ryu no Kawaii”. Americans don’t.

3) The plot. Think about it. Have you ever seen a well-rendered fight scene in American animation? I haven’t. Most companies wouldn’t touch a fight scene with a barge pole, and the ones that try, fail miserably. Even Ralph Bakshi. That ruins a good portion of the story right there, if you ask me. Other plot points, I’m sure, would either be cursorily glossed over or omitted entirely. Take, for example, the simple fact that they are not starting at the beginning! What was it that Julie Andrews said in The Sound of Music? “Let’s start at the very beginning/ a very good place to start….” What’s the point, then? They are either going to have to pack in a load of flashbacks, or put in a loooooong introduction, a la Dune. Sheez. Now, in anime, the thing would be released, in chonological order, on a series of tapes (or in a series of TV installments). Just like they did with Lodoss War, Gall Force, Oh! My Goddess, any of the Macrossstories, and scores of others. See a thought here? You could probably cover all of Chronicles in about six to eight tapes. That’s not too many. Oh! My Goddess is six tapes long. Especially if they have a halfway decent amount of film to each tape.

4) The Japanese like this stuff anyway. Case in point: Record of Lodoss War. It was, in fact, based (albeit, remotely,) on D&D.; That much is obvious as we have the classic D&D; adventuring company–a theif, a fighter, a magicuser, a cleric, a dwarf, and an elf. It also has lots of dragons, and the company more or less makes its way through a dungeon, slaying monsters on their way to find an evil magicuser. Can’t get much more D&D; than that. They also manage to blend the typical features of characters of both genres. The dwarf, cleric, theif, and magicuser are typical of the character classes, however, the theif is also typical anime, the fighter, who is the leader of the group, can’t fight–typical anime, and the elf is kawaii to a fault without being incompetent. Typical anime. If they can do that with Lodoss War, Dragonlance shouldn’t be too hard

And that’s my tirade. Like it, hate it, tell all yr friends about it, or e-mail me–tell me I’m a genius, tell me I’m an idiot. Whatever. I like debates.

Alas, however, I know it will not be true–someone already made a proposal like this to the TSR execs and they just about died laughing (at least that’s what I heard.) I guess they never saw Lodoss War. Maybe a manga?

I came here from Nevermind about 4 years ago, and now I live in Sycamore, IL, a small town next to NIU. It's cold here, the people backward, and the "technology" inexcusable! But it's a nice place. They call me "Jenn Lindgren" because they can't be bothered to try and recite my real name. My interests include anime, corny movies, Dr. Who, Star Trek, and, of course, Dragonlance. Such a nice account of Krynn, too bad we gnomes never got much coverage--you're missing out on a lot.
View all posts by Aya →
Bookmark the permalink.