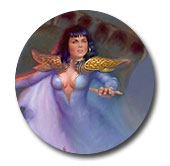 Head of the Order of Wizards of the White Robes

Born in a small village in the remote and frost-bound Icereach, Coryn Brinefallow demonstrated from an early age a peculiar adeptness with wild magic — the latent sorcery found in the wind and water, the earth and fire of her homeland, and the rest of Krynn. As a girl she was counseled by her old grandmother, the woman she affectionately called “Umma,” regarding these powers. Coryn made herself useful to the tribe, using the wild magic to aid in the catching of fish, the digging of wells (her skill was most adept in the use of water), and a host of other tasks. She knew little of the outside world, since no one from her village had ever traveled very far (except for Umma, who was close-mouthed about her adventures for many years).

Among other remarkable traits of this intelligent young woman was the fact that she taught herself to read in an almost completely illiterate society. Once again, her grandmother was the source of this compelling gift, since she had the only books in the whole village. Coryn learned to read a few simple tomes at first, but soon her irrepressible curiosity had her searching through Umma’s small hut — after the old woman would fall asleep in her armchair. It was then that the girl discovered secret books, some of them written in a language she could not begin to decipher; but all of them piqued her interest, and her curiosity.

The most dramatic thing that happened during the first fifteen years of Coryn’s life was the strange and mystical cosmic occurrence that her tribesmates called “The Night of Two Moons.” This marked the end of the War of Souls, when the true gods of Krynn found and reclaimed their world. (Of course, three moons were in the night sky — Coryn knew this, because she could sense the presence of the black moon, Nuitari, even though she, like everyone else, could see only white Solinari and red Lunitari.)

The next startling event in Coryn’s life was the discovery that, after the ancient moons’ return, she could start to make sense out of the previously undecipherable text in Umma’s secret books. This talent revealed itself to the old woman most fortuitously one day when Coryn was sixteen: Fierce thanoi, the dreaded walrus-beings that prowled the tundra that was her home, chased and trapped Coryn. Fearing for her life, Coryn uttered one of the words from the book — and teleported herself back to Umma’s cottage!

This proved that Coryn had aptitude, not just in wild sorcery, but in the true magic of the world, with power rooted in the presence of the god-moons. Umma confessed to Coryn that, in her younger years, she herself had studied magic in the Tower of High Sorcery in Wayreth Forest. For years she had wondered if her granddaughter would have the same gift; a question that was pretty much moot, given the absence of the godly moons following the Chaos War. When Coryn did demonstrate aptitude, Coryn kept secret the fact that her granddaughter’s gift was in fact dramatically more powerful than her own. Whereas nearly all magic users require tutoring and study before they can cast a simple enchantment, Coryn had learned to cast several spells in much the same way that she had learned to read: simply by studying the texts!

Umma wasted no time in sending the girl off to visit an old colleague, Jenna of Palanthas, thus starting her on the beginning of a quest for power and greatness that would continue into the Age of Mortals. Beginning as a mere understudy to Jenna — who was head of the order of the Wizards of the Red Robes—Coryn also met her mistress’s rival, Dalamar the Dark. The two powerful wizards vied for control of the (they thought) impressionable young woman until Coryn took matters into her own hands. Leaving the two elder wizards and going to the Tower of High Sorcery, Coryn took the Test of Magic and emerged wearing the robe of immaculate white.

Thus it was that, though a mere sixteen years old, she found herself on an equal footing with the two most powerful wizards on Krynn. They all needed each other, since it required the full triumvirate of them to restore the Master of the Tower to his rightful place, and to gather the robed wizards — long dispersed and despairing — for a new conclave and a restoration of the ancient orders of magic. Each of the three, respectively, is the head of her (or his) order, but each needs the other two for the power of magic to fully blossom in the Age of Mortals.

In her adulthood, Coryn has traveled the world, though she makes her home in Palanthas — indeed, she dwells in the great manor that was Jenna’s home and laboratory, until the Red Lady made the tower and Wayreth Forest her permanent home. Coryn has used her powers to aid the lords of Solamnia in their fight to restore justice, peace, and prosperity to their ravaged homeland. But she is not a patsy of these lords, and indeed, she has been known to expose corruption and treachery even at the highest levels of the knightly brotherhood.

Coryn is skilled at all types of magic, though she has made a specialty of brewing potions. As befitting one who wears the white robe, she is generally altruistic, and she often helps unfortunate souls simply because she can and because it seems to her to be the right thing to do. She is not above making money — she earns a hefty profit on each specialty potion she brews for her many wealthy clients — but she takes little care with her funds and has not amassed anything like a fortune.

Although generally virtuous, Coryn is not a prude, and she has not taken a vow of chastity. She is a beautiful woman — her olive skin and long black hair, legacy of her aboriginal roots, are considered exotically attractive in the north. Although she chooses her lovers with care, she does, occasionally, make such a choice.

Read more about Coryn in Wizards’ Conclave by Douglas Niles.

Douglas Niles is a fantasy author and game designer. Niles was one of the creators of the Dragonlance world and the author of the first three Forgotten Realms novels, and the Top Secret S/I espionage role-playing game. He currently resides in Delavan, Wisconsin with his wife, Christine, and two Bouviets, Reggie and Stella. He enjoys playing his guitar, cooking, and visiting with family.
View all posts by Doug Niles →
Tagged  Wizards of High Sorcery.
Bookmark the permalink.