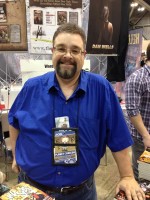 TALINTHAS: First, Could you please give us a bit of your history? How did you get involved in writing, and specifically, Dragonlance? You’ve written two pieces, a short story and now the Young Adult novel. How familiar were you with the setting before you started writing for it?

Dan Willis: Actually I wasn’t very familiar with Krynn at all. Some people think that shows but I’ve tried to not just work in the DragonLance setting but to bring something to it as well. Maybe it’s writer’s vanity, but I kind of want to leave my mark on Krynn rather than just passing through it. I ended up reading the entire DragonLance campaign setting book to prepare for this.

TALINTHAS: Now that you have spent some time exploring Krynn, what are your thoughts of the world? What about Dragonlance appeals to you most?

Dan Willis: As it is, Krynn is a great setting. The only real downside is that there’s so much to it that it’s virtually impossible to set a story there and not step on the toes of established mythology. On the other hand, however, there are plenty of unexplored corners of the continent for those of us who came to the party late to explore. All in all, it’s a fun place to do a story in.

I do often wonder about how many dragons there are in the world. I mean, in most DL stories you can’t swing a dead cat without hitting a dragon. I always wonder how that many dragons find enough food to keep going? You’d think there wouldn’t be any people left.

I think my favorite thing about the DragonLance setting is the acceptance of humor. Most fantasy takes itself too seriously, DragonLance never has. Sure there are serious moments, but then you have Kender and Gnomes. There’s a gnome in one of my upcoming DL books and I had an absolute blast writing him. Funny and brave at the same time – great!

TALINTHAS: Let’s discuss your new novel, "The Dragon Well". This is book three in the New Adventures series of Young Adult Dragonlance novels. Have you worked with YA books before?

Dan Willis: Yes, "The Dragon Well" is book three of the "Spellbinder Saga." It’s an ongoing tale where each book contains a more-or-less self-contained story.

Up to this point, I have not had anything published in the YA market. I did think it was kind of funny that Wizards wanted to do a DragonLance YA series. Heck, I started reading fantasy when I was like ten, so for me, fantasy is a YA genre.

Writing for young adults wasn’t anywhere near as hard as I thought it would be. I know that kids can be a very discerning audience, so I basically just wrote a good fantasy story, just like I would have done for adults. I think the only real differences were that I toned down a couple of the fight scenes and omitted one or two more "adult" elements. Other than that, this is the same story I’d have written for anyone else.

TALINTHAS: I understand that the first three volumes of this series were written roughly simultaneously. Was it difficult to get into the minds of the characters knowing that you were writing the third volume without seeing the first two? Did you communicate with Tim Waggoner or Steven Sullivan for plot continuity?

Dan Willis: In a word, yes. Coordinating with two other writers was tough, but it was also a lot of fun. I was in kind of a unique position. When I got the call to do The Dragon Well, I was between projects. That meant I could get right on it. All I had were outlines of the first two stories and detailed descriptions of the characters and the overall story. With that in hand, I got my outline approved and wrote the story. From what I’ve been told, mine was the first draft to be completed. Tim, Steven, and I were all doing out thing at roughly the same time so there really wasn’t much back and forth. It was our editor, Nina Hess, over at Mirrorstone who kept us on target and she did a terrific job.

Overall, this wasn’t really a bad way to write. Steven and I got to basically do our own stories while tying them loosely to the main story. Tim’s took care of the kickoff and the wrap-up which helped the story to move in the direction it was supposed to. This really was the best of all worlds. I got to tell my own story, but I was also able to tie into a larger story and develop the characters in that direction.

TALINTHAS: Could you please describe the plot of "The Dragon Well"?

Dan Willis: The story begins shortly after the events of book 2. Catriona’s self-confidence is shot, the group is in dissaray, Davyn is in charge and he’s scared. He’s scared that the whole affair with Maddoc was a mistake and he wants out. To that end, he takes the group into the mountains in winter to escape Maddoc. This ill-advised move almost gets them killed but ultimately introduces them to Shemnara, a seeres with the ability to read the future. She tells them that she will aid them in their quest to recover Nearra’s memories — if they do her a favor, that it.

From there it’s one misadventure after another until all truth is laid bare and none of the young heroes will ever be the same again. (Bum, bum, bum!)

TALINTHAS: In this book, a few of the characters experience some rather dramatic changes, most notably Davyn later in the story. What was it like trying to get into the heads of these characters?

Dan Willis: It was serious fun. To me, if you want a great story, you’ve got to have great characters. Fortunately for me, Tim Waggoner developed some great characters for this series. Each of them is different and they all have goals, dreams, and skeletons in their closet. It’s great when you have characters with ulterior motives because you never know when those motives are going to rear up and distract the character, usually at exactly the wrong time.

Davyn was a lot of fun in this story. He starts off hesitant, gains some confidence, gets smacked down hard, then has to rise again to the challenge. This cycle also holds true for Catriona, I enjoyed the few chapters where I got to get inside her head as well.

As for the big changes, those were all coordinated with Mirrorstone to ensue the story continuity stayed solid and the main story kept going in the right direction. It was hard sometimes, but the rewards were worth it.

TALINTHAS: The Dragon Claws were a really neat weapon idea. Can you elaborate on them, and how they work?

Dan Willis: This is my attempt to design an interesting weapon. It’s part sword, part axe, part tonfa. Basically if you take one of those super-elaborate sword blades from typical fantasy art (think Games Workshop), cut off the handle, and cut a hole on the dull side of the blade for a hand grip, then you’ve got a Dragon Claw. The actual design has a curved point at the top and a hook with a back-spike at the bottom. It’s a thoroughly nasty weapon.

After I came up with this, I discovered that there are some similar weapons in the extreme fringes of martial arts weapons, but nothing as nasty. Basically the purpose of a Dragon Claw is to put the maximum amount of damage-dealing edges right were a combatant can use them.

One of these days, I’ll have some made for myself.

TALINTHAS: The mentor character of Set-Ai was very interesting. Did you feel that it was necessary for the growth of the party to introduce such a character?

Dan Willis: Absolutely. Since this is the third book in a four book series, this is the part of the Meta-story where the characters must put aside their personal problems and come together so they can face the finally in book 4. Since they needed to learn a lot about fighting and teamwork, I decided to present them with a mentor, someone older and wiser who’s been down the road before them and can show them the way. Enter Set-ai.

I won’t give away too much, but Set-ai was so well received that you might see more of him in the future.

TALINTHAS: Of the party, which character did you enjoy writing the most?

Dan Willis: I really enjoyed Davyn. I’m not sure the original idea was to make him the main character, but I’m glad it worked out that way. He has a lot on his plate in this book and the group’s triumphs and failures are more personal for him. It was fun getting into his head and watching him grow as a person and a leader.

I also really enjoyed Elidor. I had a lot of fun with his character, making him human (so to speak). I figured that, since he was a thief type character, that he would have grown up in the city and wouldn’t have a lot of the typical elven "woodsy" knowledge. There are a lot of great scenes where I challenge that stereotype.

TALINTHAS: I have heard that you will also be writing another book in this series. Could you give us a hint on that upcoming work?

Dan Willis: There will be a continuation of the New Adventures series and I have been graciously allowed to write book 7. It a great story about one of the characters from the original series who’s dealing with the repercussions of their actions. It also sets up some continuing adventures. One of the people who’s read the first draft described it as a ghost story, but I wouldn’t go that far. At the moment it’s titled "Dragon Knight" and it should be out sometime in 2005.

TALINTHAS: In your short story, “Lake of Death”, you wrote a very unorthodox kender character. Could you describe your motivations behind him?

Dan Willis: Well, Wylinger is supposed to be an Afflicted Kender. After I got a bunch of mail about this I realized that it isn’t as obvious as I thought it was. Since the only information on Afflicted Kender available when I wrote Lake of Death was from the War of Souls trilogy (and it was spotty at that) I just sort of made him up as I went.

I guess the "Official" line on Wylinger is that he was not at Kendermore when it was destroyed but he got there soon after. He was still affected by the destruction but not as much as the others. As such, he is more worldly then normal kender but retains his taunting abilities and doesn’t suffer from debilitating fear.

Basically, he’s a short human with some of the Kender irreverence.

The real fact of the matter is that Tracy and Margaret did Kender so well, I didn’t want to even attempt that style of Kender. When the Afflicted Kender came along, I thought that gave me a great opportunity to try something different.

TALINTHAS: Thank you for taking the time to do this interview. We really appreciate it.

Dan Willis: I just wanted to add that I had a lot of fun writing this book and I hope everyone has fun reading it. I appreciate the opportunity to talk with you about the book and, if you have any more questions or want clarification, just ask.

Shivam "Talinthas" Bhatt is a long-time member of the Dragonlance online community and a contributor to the d20 Dragons of Krynn book by Margaret Weis Productions.
View all posts by Talinthas →
Bookmark the permalink.