Dragonlance originators Tracy and Laura Hickman have been publishing game designs and stories together for over thirty-two years - nearly as long as their marriage - and thus started them both on a life of adventure and imagination. Tracy is a New York Times best-selling co-author (with Margaret Weis) of many Dragonlance novels including the original "Dragonlance Chronicles", "Dragonlance Legends", "Rose of the Prophet" and "Darksword" trilogies as well as the seven-book "Deathgate Cycle". Tracy and Laura are remembered together for their role-playing game designs in "Dragonlance" and the "Oasis of the White Palm" series but are perhaps best known for their classic adventure, the original "Ravenloft." For more information on Tracy, visit his website at http://www.trhickman.com/.
No comments

Discussion with Tracy Hickman on his early works. Read More

Falconer GH: Regarding Pharaoh, The Acaeum notes: “Daystar West’s introduction is exclusively Amun-re’s dream-like chant that the adventuring party hears as they traverse the desert. This chant appears later in the TSR version (page 9). Daystar’s and TSR’s chant sequence have all the same elements but Daystar’s is about 10… Read More

A discussion with Tracy Hickman on the Bronze Canticles world, and how the Dragonlance game relates to it. Read More

This article is an excerpt of a conversation between Margaret Weis and Tracy Hickman on the nature of the gods. Read More

Tracy Hickman discusses his earliest publishing venture, DayStar West Media, as well as the elements that would lead to Dragonlance and Ravenloft. Read More 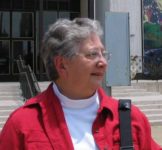 Jean was the first Weis & Hickman fan; she was the one who championed us to write the novels when no one else thought we could do it. She stood up for us and went to bat with the TSR brass to make sure we were the ones who wrote… Read More

Tracy Hickman and Laura Hickman with the spacecraft simulator they built prior to coming to work for TSR, Inc. This was a prototype for a ‘networked’ arcade game which Tracy was creating … a form of MMORPG decades ahead of its time. The project failed to launch, which put Tracy… Read More