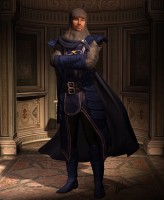 Not everyone who joins the Citadel of Light is destined to become a holy spellcaster. Some of those that guard the domed Citadel, while being dedicated to the cause, simply do not have the spiritual fortitude to draw upon. These people serve the Citadel as the Citadel Guardians.

Citadel Guardians stand watch over all entrances to the Citadel and patrol the forests and lands about it, ever watchful for those that wish harm to those within the Citadel.

To take a citadel guardian level, a character must have Knowledge (religion) 1 rank, and be about to take his 2nd, 4th or 7th level of fighter.

The citadel guardian levels have the class skills as the fighter class plus the following: Knowledge (arcana), Knowledge (nature), Knowledge (religion), Sense Motive, and Spellcraft.

All of the following are features of the substitution level.

Discern Lies (Sp): A citadel guardian has the spell-like ability to use discern lies a number of times per day equal to his Wisdom modifier (if any, minimum of 1). The saving throw is Wisdom-based.

This replaces the standard fighter bonus feat that would normally be gained at 2nd level.

Favor (Ex): At 4th level, the citadel guardian gains access to the resources of the Citadel of Light and can call upon favors from among the upper ranks of the Citadel or any of the priesthoods that have temples there. This ability functions exactly as the favor ability of the Noble (see the dragonlance campaign setting, p.51). If the citadel guardian already possesses this ability from another source (such as having levels in noble), the bonuses stack.

This replaces the standard fighter bonus feat that would normally be gained at 4th level.

Valor of the Guards (Ex): At 7th level, a citadel guardian may channel the strength of his conviction in the Citadel of Light into actual physical power. Once per day, as a free action, he can gain a +4 morale bonus to his Strength and Constitution ability scores for a number of rounds equal to 3 + his Charisma modifier (if any).

The character loses 2 hit points permanently to gain this ability.