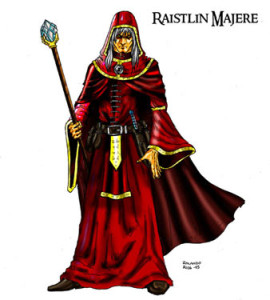 Of all the orders of Ansalon, none are as feared or as respected as the Orders of High Sorcery. Throughout history, the Wizards of High Sorcery have been viewed as both a bastion of strength and an arcane abomination by the people around them.

Wizards draw their strength from the Gods of Magic — Solinari, Lunitari, and Nuitari — who trained the first Wizards of High Sorcery in their arcane laws. This First Conclave trained other spellcasters, starting a process of seeking out worthy students and handing down the principles and codes that would eventually bring order to the arcane energies that threatened constantly to disrupt the world. Since that time, the laws of magic have been upheld by all three orders of the Wizards of High Sorcery.

The Gods of Magic are responsible for setting down the Foundations of wizardry. The three axioms state:

Wizards of the Black Robes: Though Black Robe wizards embrace the cause of evil, they don’t seek to advance that cause by randomly hurling fireballs at the peasantry (at least not frequently), for such activities would abuse and jeopardize their primary loyalty to magic itself. Black Robe wizards may be cruel, but they are also selfish and cunning, and tend to avoid open acts of violence if more subtle ways can be found.

Wizards of the Red Robes: Red Robe wizards tread the path of neutrality, working to balance good and evil in addition to their ultimate loyalty to magic. While forces of good and evil may battle for control of Krynn, the forces of neutrality understand that it is the balanced dynamic of that battle that truly defines the world.

Wizards of the White Robes: Aside from their vow to uphold the primacy of magic, the cause of good is the White Robe wizards’ central concern. Acts that violate the precepts of good can lead to a wizard’s ruin, and White Robes who stray from the path soon find themselves cut off from Solinari’s blessing. Though sometimes finding themselves allied with clerics of the pantheon of good or the Knights of Solamnia, the ever-present fear of persecution by a suspicious populace means that even White Robes must often operate alone.

The Wizard of High Sorcery gains Intimidate as a class skill.

Each of the three Orders of High Sorcery has a degree of expertise in two schools of magic. The favored schools are abjuration and divination (White Robes), illusion and transmutation (Red Robes), and enchantment and necromancy (Black Robes). When choosing a school to specialize in, it is recommended, though not mandatory, to choose a school that matches your order. Otherwise, the rules for the wizard’s Arcane School ability apply.

At 4th level, a wizard takes the Test of High Sorcery, designed to challenge the dedication of any student desiring to master the art of magic.

Each Test of High Sorcery is uniquely designed for the individual taking it, and should include at least three challenges to be overcome by the wizard’s knowledge of magic and its use. Characters must solve problems and defeat foes by casting every spell they know at least once, and should also face confrontation with someone thought to be a friend or ally. The Test must also include at least one lethal danger of a Challenge Rating equal to the wizard’s own level.

Those taking the Test can bring companions with them if they desire, but will find the challenges scaled upward in compensation. No one who accompanies a wizard on his challenge has any guarantee of returning, for by the harsh terms of the Test, failure means death.

Upon completion (and survival) of the Text, the Wizard of High Sorcery chooses the robes that match his moral alignment: black for evil, red for neutral, white for good.

This ability replaces a wizard’s bonus feat at 5th level.

A few notes on changes:

Trampas “Dragonhelm” Whiteman is best known for co-creating and administering the Dragonlance Nexus fan site. He is co-author of three Dragonlance books – Holy Orders of the Stars, Knightly Orders of Ansalon, and Races of Ansalon. When not evangelizing Dragonlance and other settings, Trampas is a husband, father, podcaster, and web designer. Trampas also enjoys reading comics, reading fantasy and scifi novels, and playing D&D.
View all posts by Trampas "Dragonhelm" Whiteman →
Tagged  Wizards of High Sorcery.
Bookmark the permalink.