Which Dragonlance Character Should Be the President? 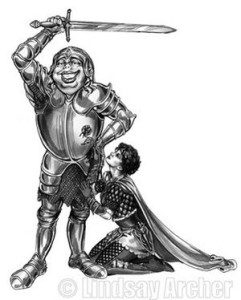 Looking at the broad cavalcade of candidates available, it is quite clear that only one name stands head and shoulders above the others, the clear choice of the people.

Yes, Lord Toede would be the most honest president we’ve had in years. From the get-go you know he’s a back-stabbing, weaseling, corrupt individual with the moral code of a brain-damaged hamsters. You know what he’s thinking before he thinks it. No more official denials and spin-doctoring! He would have Groag as his veep, who would be both smarter than Quayle and more lively that Gore. After you think about it (and fill out the paperwork for your part of the bribe money), I think there is no doubt that Citizen Toede should be the president for the new millennium.

Jeff Grubb is an award-winning author, game designer, and world-builder with a host of credits. He is much calmer in real life.
View all posts by Jeff Grubb →
Bookmark the permalink.