War of the Darklance: Origins 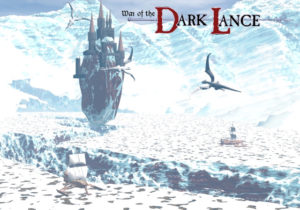 Back in the 1990s, my buddy David Miller ran a game set after the Blue Lady’s War, where the Dragonarmies were amassing once again, this time under a single highlord. Icewall Glacier was moving north at a rapid pace and had covered Tarsis. This was inspired by the animated movie Fire and Ice. Our characters had to stop this. We never really saw the end of this game, but it served as the inspiration for a game I was about to run.

At this time, The Second Generation was out and we were anxiously awaiting Dragons of Summer Flame. It was 1995, and I was stoked about these Dark Knights. Little did I know then that I would be the guy who would write them up for Knightly Orders of Ansalon. My game included many elements from Dave’s game. Dave, Kenneth Reed, our friend Karen Thronebury, and sometimes the occasional other player would see this campaign through. In this game, the High Clerist’s Tower fell. Little did I know at the time that Weis and Hickman had the same idea!

Time moved on, and in 2003, I found myself working on the original War of the Darklance fan project with Matthew “Rooks” Blasi and Pat “Rath” Coppock. This PDF included a killer cover by Ray Morris, a complete rules set that Matt wrote up, and the first codified look at the War of the Darklance alternate timeline. This was prior to the Dragonlance Campaign Setting.

We must have done something right, because I was asked later on by Jamie Chambers of Sovereign Press to include War of the Darklance as one of the alternate timelines in Legends of the Twins. There was further development with the single highlord, now identified as Feal-Thas, who was brought back from the dead as a death knight. Jennifer Meyer did a wonderful art piece with him.

The fan reaction has overall been positive. I hope that someday, you will get a chance to travel down this fork on the River of Time.