This is an encounter set on the world of Krynn, featuring draconians, well-known servants of evil in the Dragonlance setting. This encounter can happen anywhere along a deserted road when the party has left a town, village, or fort behind and set out on their travels once more.

As the encounter begins, read or paraphrase the following text.

Traveling on the roads of Krynn is rarely safe, particularly when you travel alone. You know well enough to travel in a group, but it appears that the young man on the road ahead of you wasn’t so wise. Now it seems that he’s about to pay for his error in judgment. The man is surrounded by four heavily cloaked figures holding swords. As you approach, they cast off their cloaks to reveal the scaly hides and small wings of draconians! The young man glances in your direction and calls out for help as the draconians advance on him. 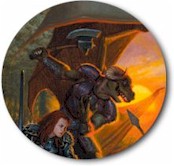 Creatures (EL 7): The apparent rescue is a trap. The victim of the four Baaz draconians is actually a Sivak named Thass who assumed the human’s form when he killed him a week ago. Unfortunately for Thass’s plans, the human’s death has become known, making the form almost useless except against travelers like the PCs.

Ideally, Thass would like to capture the party, giving him a choice of forms to take and allowing him to interrogate his victims. If the PCs prove resistant to capture, he’s willing to settle for killing one of the characters in combat in order to assume a new form. Once the party is engaged with the Baaz draconians, Thass uses the element of surprise to try to subdue one of the characters (see Subdual Damage, p. 134, Player’s Handbook). If he isn’t immediately able to do so, Thass abandons his human disguise and fights in his true form.

If the Dungeon Master desires, this simple encounter can be expanded into a larger adventure with a little work. Thass and his minions are clearly on some sort of intelligence-gathering mission, and that doesn’t bode well for the area the characters are in. Information on Thass’s person could reveal part of the draconian’s larger plan, leading the characters to further adventure. Perhaps the information is so valuable that the draconians in the area launch repeated attacks against the PCs to recover it.

The characters could discover written orders on Thass’s person, telling him to deliver certain information about the defenses of a nearby town or fortification to a particular meeting place. Clever players might seize the opportunity. With one of them pretending to be Thass and the others dressing in the heavy robes of the Baaz, the party can take the draconians’ place and show up at the meeting to feed false information to the draconians. Or they can attempt to lead them into a trap that undoes the draconians’ plans to raid the area.

Draconians are monstrous humanoids created by the followers of the evil dragon queen Takhisis. Followers of Takhisis stole the eggs of good metallic dragons while they slept and performed evil rituals to summon demons from the Abyss to inhabit the eggs, corrupting them and causing them to hatch into draconians. Draconians are evil by nature and served the Dragonarmies as troops and spies in their initial assault on the nations of Ansalon.

When the Heroes of the Lance revealed the true source of the draconians to the good dragons, they joined the fight against the Dragonarmies and helped drive them back.

Draconians are humanoid and most are roughly human-sized. They have scaly hides and dragonlike faces, clawed hands and feet, and tails. Most draconians also have leathery wings, although only Sivak draconians can truly fly. The rest of the winged draconians can only use their wings to glide clumsily. Each draconian also has special abilities based on its type.

Draconians are evil through and through, created to fight and kill. They’re crafty, but aren’t too intelligent and tend to require guidance from others to carry out their duties. They have a brutal disregard for life, and a deep-seated hatred for all other creatures except for dragons and other draconian species. They enjoy senseless brutality and strong drink. During the War of the Lance, draconians often took over taverns and inns as their command centers to ensure the spirits would keep flowing.

Draconians have short, stubby tails, lizard snouts, and scaly bodies. Their coloration serves as a dim reminder of the dragons from which they were spawned. Baaz scales have an unmistakably brassy coloration, and Sivaks are a polished silver color. Female draconians tend to be shorter and more finely built than males.

While both Baaz and Sivaks have wings, only Sivaks can truly fly. Draconians move either by walking upright, gliding down from heights (for a distance four times greater than the height from which they launched), or running on all fours while flapping their wings. This latter form of movement is their fastest, and it kicks up an intimidating dust cloud on the battlefield. All winged draconians have the Run feat for free, allowing them a faster running speed while running on all fours and flapping their wings.

Draconians are drawn to evil dragons and revere them. They serve dragons willingly and eagerly, while only reluctantly serving leaders of other species. When a dragon commander is within line of sight or when entering a battle under the command of a dragon (in the chain of command), draconians receive a +1 morale bonus on all attack rolls and saving throws.

Draconians have life spans that approach 1,000 years. All draconians love ale and spirits.

When draconians die, the magical energies that are inherent in their bodies are released in a death throe with spectacular and catastrophic effects.

Draconians are proficient with all simple and martial weapons.

Disease Immunity (Ex): Draconians are immune to all natural diseases.

Low Metabolism (Ex): Draconians can survive on one-tenth the food and water it takes to sustain a human.

Baaz occupy the bottom rung on the ladder of draconian social order. They are often abused and treated as slaves by other draconians. In the past, the Baaz could do little to change this situation, so they remained aloof from others not of their kind. However, with the arrival of female Baaz, this is beginning to change. Baaz females are organizers who work well in groups. They are working to change the status of Baaz at large by refusing to cooperate with those who abuse them and encouraging the males to follow their lead.

Baaz are often encountered prowling through civilized lands in disguise. Their size and build is such that they can pass themselves off as human by wearing large hoods and masks and concealing their wings under robes. Baaz males serve as scouts and spies, while female Baaz are rapidly becoming highly prized managers and low-ranking military commanders.

Baaz are the physically weakest and most plentiful of all draconians. Male Baaz stand between 5 feet and 6 feet in height, with the majority of them being on the short side. Female Baaz tend to be lighter in build than males.

Death Throe (Su): On the round that a Baaz reaches 0 or fewer hit points, her body turns to stone. The creature struck the deathblow must roll a successful Dexterity check (DC 13) or have his weapon fused to the draconian. The Baaz “statue” crumbles to dust after 1d4 minutes. Items carried by the Baaz are unaffected by the petrification and subsequent dissolution. Any stuck weapons can be retrieved after the Baaz crumbles away.

Glide (Ex): A Baaz can use her wings to glide, negating any damage from a fall of any height and allowing her to travel horizontally up to four times the vertical distance descended.

Sivaks are the most powerful of the commonly encountered draconians. Both male and female Sivaks serve as elite warriors and infiltrators who are highly sought after by evil leaders and other draconians. The males’ ability to perform covert operations is aided by their shapeshifting ability. The males stand close to 9 feet tall. Females are between 6 and 7 feet tall.

Both sexes prefer to wield large, ornate bastard swords. Sivaks’ tails are long (for draconians), and they often use them in combat to knock foes off balance.

Trip (Ex): As a standard action, a Sivak can use his tail to make a trip attack using its normal melee attack bonus (+10).

Shapeshift (Su): A male Sivak is capable of assuming the form of a humanoid of his own size or smaller at the moment he kills it. The Sivak does not gain the memories, skills, or spell use of its victim, but his appearance and voice is an exact match to its victim’s. The Sivak can change back to his normal shape, but after doing so cannot shapeshift again without killing another humanoid.

Blend (Ex): Sivak females cannot shapeshift like male Sivaks. Instead, they have a chameleonlike ability to blend in with their surroundings. This works just like a robe of blending, giving the Sivak a +15 circumstance bonus to her Hide checks and allowing her to change self at will.

Divine Grace (Ex): Sivaks add their Charisma modifiers to all saving throws (included in the numbers above).

Male Death Throe (Su): A male Sivak changes shape when slain, assuming the form of the being that killed it. This death shape lasts for three days, and then the entire body decomposes into black soot. If the Sivak’s slayer is larger than the Sivak or not humanoid, the Sivak instead bursts into flame, dealing 2d4 points of fire damage to all within a 10-foot radius (Reflex negates, DC 17).

Female Death Throe (Su): Female Sivaks do not assume the form of those who kill them. Instead, they burst into flames when killed, dealing 2d4 points of fire damage to all within a 10-foot radius (Reflex negates, DC 17).