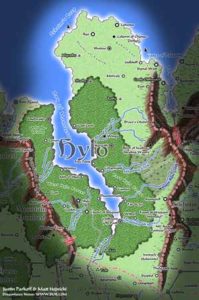 The region of Hylo, according to legend, was founded completely by accident. Although its history is riddled with literally earth-shattering events, the kender of Hylo will tell you that nothing ever happens to them – which is very disappointing from their point of view.

Hylo is located on the island of Northern Ergoth in the North East region of Ansalon. The Hylo forests, which make up a large part of the nation, are on the northeastern corner of the island, beside the Bay of Monsters. The Sentinel Mountains make up the backbone of the region while the forests are peppered with tree villages populated mainly by kender. A few of these villages include Legup near the mountains, Lookit on the river of the same name and Gobwatch to the south. The capital city, Hylo, is the largest tree top village in the region.

The history of Hylo is very interesting, or so the inhabiting kender will tell anyone who is willing to listen. Legend has it that Hylo was established when a flying citadel manned by kender crashed into the Sentinel Mountains around 2600 PC. The name Hylo came from one very clever kender who described the citadel as being really high and then really low right before it crashed. The citadel kender spread out and decided to settle down among the trees. The kender established independent trading with the adjacent Empire of Ergoth until the infamous Battle of Three Rose Creek in 2431 PC. The battle resulted in Hylo’s integration into the Empire and so it remained for over half a century. In 1791, the so named Rose Rebellion ended with the independence of the nation of Hylo. The newly independent nation allied itself with the Knights of Solomnia and the (unofficial) kender division called Knights of Hylo was formed. During the Third Dragon War in 1018 PC, Hylo was invaded by the Takhisis army but when Huma defeated the Dark Goddess, the kender were freed. For a thousand years nothing happened and the kender were getting pretty bored. Kender usually tend to skip this part of the story, so there is not much known about the last millennium of the PC era.

The most interesting, and the most tragic, event in Hyloian history was the Cataclysm. Half of the nation was destroyed, lost forever to the sea. Most kender will refer to the subsequent years as the "darkest times." The surviving kender became scared as the first example of the affliction of fear reared its ugly head. The Hylo kender became deeply religious in response to the gods’ anger. During the War of the Lance, the kender forged an alliance with the Sikk’et Hul goblins. Most Hyloian kender refer to this era as "That time when nothing happened and everyone else was having all the fun." The War of the Lance did not greatly affect the area of Hylo much.

After the Chaos War, Hylo was mostly unaffected by the turmoil that much of Ansalon was facing. During the Age of Mortals, Hylo became a nation of refugees when the kender capital of Kendermore was destroyed. The Kender Flight, a trail of displaced afflicted kender, began in Balifor and ended in Hylo where their fellow kender welcomed them with open arms. That is, until 13 SC when Belladonna, a refugee from Kendermore, ousted the long-reigning Windseed Family and became the sole ruler of Hylo. Belladonna’s coup resulted in high political tensions between the displaced and the native kender. The laws created by Belladonna are sometimes followed by violent rebellion, although most laws are generally ignored. With threats of goblins to the south of Hylo, Belladonna has tightened her defenses and her hold on the kender of the region.

By the year 428 AC, Belladonna had tightened her control of Hylo as she fears the goblins coming up from the south. With Ergoth expanding into the Sikk’et Hul, these creatures have little choice but to head north. Along the borders of Hylo many afflicted kender have formed together Belladonn’a Guard in which they train for the eventual invasion by them. Over the years Belladonna has become the matriarch of the nation and refuses to yield power to others.