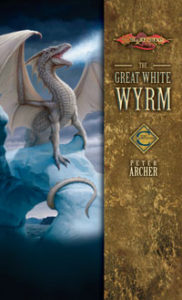 The Great White Wyrm is, quite simply, the tale of Moby Dick as if it happened in the world of Dragonlance. Typically, I don’t rate books that are modeled after other stories as high due to lack of originality. Yet I find myself forgiving this point. You see, in the introduction, Peter Archer explains his own real-world link to Moby Dick, which helps to enhance the story. Furthermore, the story is an enjoyable one about a unique villain for the Dragonlance setting. So I not only forgive the use of the age-old tale, I actually enjoyed it.

The Great White Wyrm centers around the character of Ayshe, a dwarf who is a victim of the White Wyrm and who finds himself amongst the ranks of Dragonsbane, a group of elves (and one human!) who are dragon-hunters. I think this is one of the first times we have seen such a group in Dragonlance, save for the characters in Margaret Weis’ short story “The Best” (Dragons in the Archive).

With recent Dragonlance stories, we’ve seen a lot of nation-building. It’s really good to see a good-old Dragonlance tale in the midst of it. I should probably mention that The Great White Wyrm is book three in the Champions series, which also adds to this. With former Wizards of the Coast editor Peter Archer at the writing reins, this book is, quite simply, a breath of fresh air. It’s good to have some new blood.

The characters are all fairly good, though I found it a bit tough keeping track of so many elves. Still, Peter Archer does a great job at presenting them with different personalities. Ayshe was a joy to have aboard the Starfinder, the ship of the Dragonsbane. He doesn’t act like a stereotypical dwarf, though he has some dwarf qualities to him. Harfang was one of my favorites, having to decide between his loyalty to Captain Tashara and avoiding his inevitable fate. Captain Tashara herself is a fascinating character, and I find myself wondering about her background. This tells me that Peter Archer did a fantastic job of developing her enough while still leaving a hint of mystery. Still, I would have liked to have seen more development with her. The wizard Malshaunt proves to be an interesting mystery. While not likeable, he is eternally loyal. One questions whether he is a Red Robe or a Black Robe, though I think the end of the book pretty much sums that up.

I should also say that the equipment of the Dragonsbane, particularly the wyrmbarb, was quite fascinating. Peter did a great job with atmosphere on this novel.

This isn’t to say that the story is without fault. A few times, there are continuity issues, such as when the blind captain Tashara looks through a spyglass (on three different occasions, no less!) and a dwarf without hands holds a finger up to his mouth. Furthermore, the draconians in the story did not display their death throes. Draconian death throes are a pretty basic tenet of Dragonlance, so I found it a bit annoying, but one can overlook it.

What also frustrates me about this book is that we don’t see the very iconic weapon for which the setting is named – the dragonlance. To this day, I am shocked at how little we see the dragonlance used in the setting. I understand that you don’t want to overuse the weapon, but this novel is a natural for its inclusion. A quest to find a unique dragonlance from the days of Huma would have made a great addition to this book, and would not have made the final battle against The Great White Wyrm too easy at all. A dragon is still a dangerous beast, after all!

As for the dragon itself, I liked its portrayal. The dragon is a unique breed, a storm dragon. Presumably, this is a crossbreed of a white and blue dragon, or at least somehow related to a white. While I was a bit disappointed that the dragon’s intelligence wasn’t looked into more, I liked the theme carried over from Moby Dick of mortals vs. nature. In this case, it is the very nature spawned from the world of Krynn, and the most devastating dragon ever.

To this, I will add only that I was glad the dragon was described as mightier than the dragon overlords, including Malys. I never liked the idea of the overlords nor do I think they should be Krynn’s ultimate draconic power. To see another dragon supersede Malys’ throne as the mightiest of dragons is a treat.

While this book has a couple of minor errors and perhaps too much time is spent describing the travel, I found The Great White Wyrm to be an enjoyable read. I recommend it for all fans of dragon stories and find it a breath of fresh air in the midst of the current series of novels.