The Chaos War and the Beginning of the Fifth Age 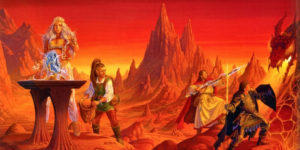 Several astute readers, poring over Dragons of Summer Flame and the Dragons of a New Age trilogy, have asked a reasonable question: How long was the first year of the Fifth Age?

The answer’s not quite as obvious as you might think. Since the Summer of Chaos ended in the Second Cataclysm, the year was only partly over when the Fifth Age began. The problem is connected to the question of when the Chaos War began and ended. Sue Cook and I have put our heads together over Dragons of Summer Flame in an effort to come up with an answer to this question.

Dragons of Summer Flame is not, unfortunately, a book that’s very heavy on dates. The only firm mention of a date in the entire book, in fact, is when Raistlin tells Palin to find Usha and take her to the Great Library of Palanthas. “I will meet you there the day after tomorrow, on midnight of Midsummer’s Eve,” the mage tells his nephew.

Since we know that Midsummer’s Eve on Krynn fell on June 21, we know that this conversation occurred on June 19. We also know, looking at the events described in the rest of the book, that the Cataclysm occurred two days after Raistlin met Usha and Palin in the Library. Therefore, the Second Cataclysm occurred on June 23. (Although we should keep in mind that the “days” grew longer during this time, for our purposes, even a longer day still counts as one day!) Effectively, the moment of the Cataclysm (that is, the moment when Usha imprisoned Chaos’s blood in the Graygem) was 0, and the Fifth Age began immediately after that point. Thus, the first year of the Fifth Age was only six months long: from June 24 to December 31.

Trying to calculate backward from this to the point when the war began is trickier. What fans of the Dragonlance Saga are accustomed to call the Chaos War in fact refers to two different wars: the invasion of Ansalon by the Dark Knights under the command of Ariakan, and the conflict with the forces of Chaos, which occurred later in the year. Weis and Hickman give a few dates that we can use to estimate precisely when these events happened, but some of this is necessarily guesswork.

Dragons of Summer Flame opens with a visit to the island of the Irda by two Dark Knights, at a point that the book describes as late spring. Two days after that, the Protector sends Usha away from the island; later that night the Irda break the Graygem, releasing Chaos. From that point to the siege of Kalaman, approximately three days pass (enough time for Usha to make the journey to Palanthas, meet Tasslehoff and Jenna, and be introduced to Dalamar; also during this time Steel Brightblade travels to Solace in the company of Palin).

The other events of Books 2 and 3 take place in approximately four days to a week. At the beginning of Book 4, we’re told that a month has passed since the taking of Palanthas (that is, since the battle at the High Clerist’s Tower and the death of Tanis Half-Elven). Several paragraphs later Weis and Hickman write, “Within a matter of weeks, Lord Ariakan was ruler and master of more territory than the Dragon Highlords had been able to gain during the War of the Lance.” I think we can allow for approximately six weeks between the fall of Palanthas and the time the story again picks up with the appearance of Raistlin at the Inn of the Last Home.

If we calculate back six weeks from June 19, we get May 8. If we go back another week, allowing for the time of Books 2 and 3, we get May 1. Three more days makes April 28 the day Usha arrived in Palanthas. Therefore, it seems reasonable to suggest that Dragons of Summer Flame begins on or around April 26.

Such are the conclusions we’ve come to about the timeline for this book. What do you think?