Tarrasque Interview: Dargaard and Beyond! 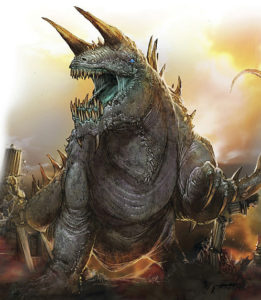 Dragonhelm: We have interviewed various Dragonlance personalities over the years, but perhaps none so different as the Tarrasque from Dargaard Keep in DL16 World of Krynn! Mr. Tarrasque, welcome!

Tarrasque: Thank you for having me, Dragonhelm, though please – call me Tarry.

Dragonhelm: Very well, Tarry it is! When we last saw you, you were working for Lord Soth, the infamous death knight of Dargaard Keep. What was it like to work for him?

Tarrasque: Terribly dreadful. Oh, don’t get me wrong. There were certain perks, such as the dental plan.

Dragonhelm: I imagine that would come in quite handy in your case.

Tarrasque: Quite. But the truth of the matter is that Soth was so dull. “Guard my keep,” he says. “Find Kitiara for me,” he says. I had to pull out my union card when he talked about cleaning the latrines!

Dragonhelm: So what brought about your eventual split with Lord Soth?

Tarrasque: Lack of vision. I would say, “Sothy, old chum, howzabout we raze the countryside, or duke it out with some dragons?” All he would do is moan a little and stare at the dried blood stains on the floor. I mean, c’mon! Hundreds of years past the Cataclysm, and he’s still crying over it.

Dragonhelm: Alrighty, then, moving on. There are those who say that you are no longer canon. What do you say to that?

Tarrasque: Oh, pattycakes, not that dreadful old argument again. There once was a day that being in print meant you were canon. Now it’s a “What have you done for me lately?” attitude. Dreadful. There’s just no respect anymore. I once guarded the Abyss. I’ve eaten dragons. Now, even the paperboy isn’t afraid of me.

Tarrasque: Oh, we’ve dated some in the past, but we’re just friends.

Dragonhelm: Uh….I meant whether she was considered canon or not.

Tarrasque: I’m not really all that comfortable talking about it.

Dragonhelm: Well, it seems to me that…

Tarrasque: CHOMP! I was getting tired of this interview anyway.

Dragonhelm: That’s all we have for today. Reporting live (for now) from the belly of the beast, this is Dragonhelm, signing off. Perhaps permanently!