Time of the Dragon

Dragon Knights are unique to the continent of Taladas, and are most prominent in the Conquered Lands. They have an unparalleled bond with the Othlorx, or Uninvolved, dragons.

The copper dragons of the Conquered Lands had all pledged neutrality, becoming Othlorx. They value their privacy and lairs tremendously. When their lairs are discovered, people are given a choice: Either join the society of Dragon Knights, or be destroyed.

Abilities: Charisma determines how powerful a spell a Dragon Knight can cast, how many spells he can cast per day, and how hard those spells are to resist.

Weapon and Armor Proficiency: Proficient in all simple and martial weapons. They are proficient in light and medium armor, but do not use shields.

Copper Dragon: Most Dragon Knights are bonded with a young adult copper dragon, the youngest dragon which can bear a rider (which then ages normally for a dragon), but some rare individuals bond with older dragons.

Dragontongue: The Dragon Knight is able to speak the tongue of the color of dragon his dragon partner belongs to at 4th level.

Improved Dragontongue: The Dragon Knight is able to speak the tongues of all dragons at 8th level.

Spells: A Dragon Knight is limited to casting a certain number of spells of each level per day, but he need not prepare spells in advance. The number of spells he can cast per day is improved by his bonus spells, if any. 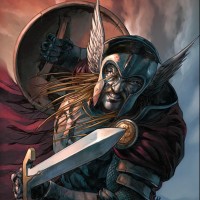 Permanent link to this article: https://dragonlancenexus.com/taladas/dragon-knight/

Her hands danced and her fingers weaved as she gathered the moons’ energy into the room. Solis, for wisdom. Lunis, for control. Even Nuvis, for power.

— Narrator, Blades of the Tiger