Royodo and the Shattered Lands 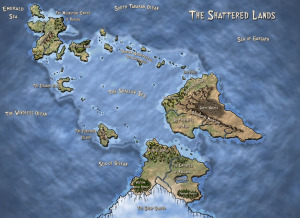 Hello and welcome to this Lost Land of Krynn: Royodo and the Shattered Lands. Here in Royodo you can experience a DragonLance setting game with an Asiatic feel. Royodo started out as the ODL project and over the span of seventeen months grew larger and larger. Originally a brief conversation between Trampas and a few others ended up as the basis for this setting. I hope that you enjoy what we have provided for you and I sincerely hope that with the release of the PDF document that no one hates me from here on out.

Thank you for the chance to write this, it could not have been completed without much community input. 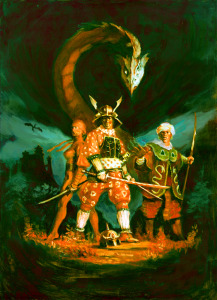 What is Royodo and the lands of the Dragon Throne?

Royodo is an alternate player-made setting for use with the DragonLance campaign setting and the sourcebooks made available by Margaret Weis Productions and Wizards of the Coast.

Where is Royodo Located on the World of Krynn?

Royodo is located opposite of Ansalon. In fact, Royodo and Ansalon are connected via the Icewall glacier. While the Icewall is now impassable it was not always so, for during the Age of Dreams and other times of global cooling , some of the well known Ansalonian races and creatures migrated across the landbridges and ice fields from Ansalon to the southern portion of Royodo.

Royodo and the World of Krynn

Royodo, prior to The Shattering or Cataclysm as it is called on Ansalon, was a smallish continent approximately 1/3 the size of Ansalon. Royodo is connected to the southern polar landmass directly opposite that of Ansalon. During the early Ages there existed a hazardous but passable land bridge between the two continents allowing a limited amount of migration from Ansalon to Royodo.

When the Cataclysm struck Istar the impact caused great rifts to form all across the lowlands of Royodo in areas with little bedrock. The Tsunami’s that followed the impact caused devastating flooding and submerged most of the continent, leaving only a scattering of large islands and a large shallow sea at the heart of a once fruitful and fertile plane.

For a short period of time after The Shattering, the gods where thought absent from the lands, but within five years new priests began to rebuild their temples to the various gods and goddesses throughout the land and to perform healing miracles.

Much of the population of The Shattered Lands was lost in the devastating flooding that followed the Cataclysm, this allowed the Dorian’s of Gargath an opportunity to settle in the newly formed Barrier Islands archipelago of the northeastern part of Royodo. The Dorians left the chaos tainted lands of Gargath for the promise of more fertile farmland and safety for their children from the bizarre and dangerous creatures of thier homeland and the corrupting taint of chaos.

Other cultures and races have either emigrated or become stranded in The Shattered Lands. Cultures such as the Khmer who like the Dorian’s came from Gargath but much earlier as exiles from their home for their religious practices. Races such as the Argonesti, a branch offshoot of the Kagonesti who have adapted to a glacial existence. Gnomes and Dwarves also call The Shattered Lands home but they are much changed from their root. The Gnomes having traveled from Taladas are of the Thinker variety but rather than an obsessive love of technology these gnomes are dedicated to the arts and philosophy, while the dwarves are immigrants from across the ice who settled in the fertile valleys of the south. During the Shattering Minotaur from Taladas where stranded in the north beyond the Oni Wall where they have struggled ever since to establish their dominance, even breeding with humans to increase their numbers. And finally Kender, seem to have invaded in full force, building huge raft towns which meander across the Shallow Sea presenting one of the most feared hazards of inter-island trade.