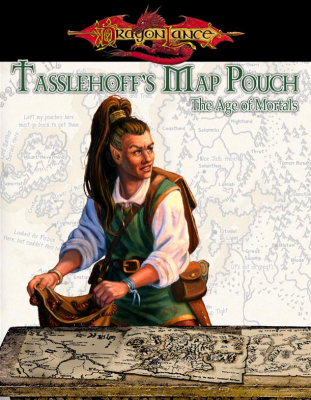 A Pouch Full of Adventure! Tasslehoff Burrfoot, famous kender adventurer, has traveled throughout the world and even through time. His maps led the Heroes of the Lance throughout their quest, as well as a new generation of heroes during the War of Souls. The contents of his map…

Buy from
DMs Guild
About the Book

A Pouch Full of Adventure!

Tasslehoff Burrfoot, famous kender adventurer, has traveled throughout the world and even through time. His maps led the Heroes of the Lance throughout their quest, as well as a new generation of heroes during the War of Souls. The contents of his map pouch have remained a secret… until now.

This collection of Dragonlance maps covers the Age of Mortals and the War of Souls. Explore the hedge maze in the Citadel of Light and climb the silver stair. Brave the ruins of Qualinost under the noxious waters of the Lake of Death. Visit the tree-town of Solace, one of the wonders of Krynn! Discover the mysteries of the Tower of High Sorcery in Wayreth forest. Or withstand the terror of a death knight’s lair in the ruined fortress of Storm’s Keep. The map pouch contains all of this—and more!

Tasslehoff’s Map Pouch: The Age of Mortals contains one dozen maps, including a poster map of Ansalon set during the newest era of Dragonlance tales. Follow the adventures in your favorite novel or find inspiration for new stories using the d20 System game products from Sovereign Press.

Dragonhelm’s Note
That rascally kender, Kipper Snifferdoo (AKA Sean Macdonald), has been through some of the major places that defines the Age of Mortals. Here is his message on what maps he has put in the Map Pouch!

*Reaches in his map pouch and pulls out some maps…*

Let’s see… In no particular order I have the Lake of Death of course. Sad place that it is…

A little town I like to call… Solace… in the Fall. I always loved Solace in the Fall with the fiery orange and red leaves in the trees.

The draconian city of Teyr. Do you know how hard it was to get a map of that place?

You have to have a map of Sanction in the Age of Mortals. So I got one of those and the lava flows look so cool and the green vales behind the city…

The shining city of Solanthus is another map here… you know you actually have to fill out a permit and pay a fee to map that place? I also hear they double the fee if you’re a kender! But that was ok because I found a pouch with some money in it anyway…

I have a map of the Citadel of Light and the Lyceums practically sparkle in the sunlight. It’s really beautiful.

Here is an interesting one called Darkling Hall with all sorts of evil trials and tests on it. I’ll have to look into that one further.

Oh yeah… there is also this one. Shhhh don’t tell anyone I have it. It might be confiscated. But it’s a map of the Tower of Wayreth. *tucks that one quickly back in his pouch*

Oh and here is one by the kender Kronn Thistleknott. Oops it says not to borrow it… But it looks like it’s a hand drawn map of the Desolation with little notes on hidden kender villages and locations of dragon lairs, neat!

And the last map I have in here is one by my “Uncle” Tasslehoff of the entire continent with all his notes scribbled all over it… I always knew Solanthus had the best jails!

The last map I have is a huge 33″x22″ map of the entire continent in full color with tons of locations marked….

*Puts back his maps*

I hope that satisfies everyone’s curiosity!

Other Products in "Tasslehoff's Map Pouches" 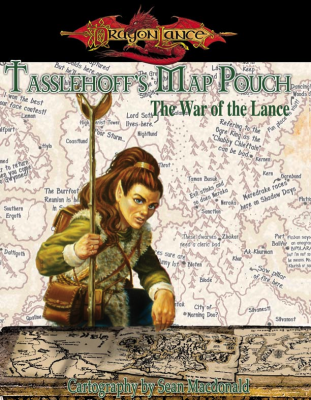 Tasslehoff’s Map Pouch: The War of the Lance 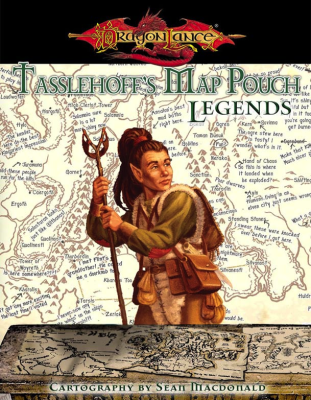