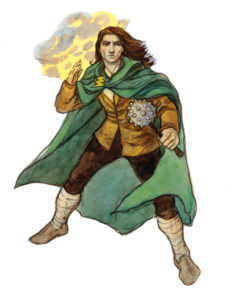 Author’s Note: The new edition of the Dungeons and Dragons game has given some new possibilities of classes to play, including the sorcerer. Born with natural magical talent, the sorcerer casts spells without the use of spellbooks.

But how does this work in Dragonlance?

This article shows a few ways on how to play a sorcerer in Dragonlance. Please note that I refer to 3e sorcerers, which are not to be confused with Fifth Age sorcerers. Third Edition sorcerers are not allowed in the Fifth Age.

The 3e Sorcerer Becomes A Wizard Of High Sorcery

The Wizards of High Sorcery discovers the presence of the sorcerer, and approaches him about taking the test, just like any other mage. The Wizards would either allow the sorcerer to continue on their present course, or try to coerce them to give up their sorcerous ways and become a wizard. If a sorcerer refuses to give up their ways, the Wizards of High Sorcery would then treat them as renegades.

The other possibility is that 3e sorcerers are automatically considered renegades. Wizards of High Sorcery might look upon 3e sorcerers as being able to control things in a way they should not. In this instance, the 3e sorcerer would be hunted down and destroyed.

Any race is capable of becoming a sorcerer. For the Wizards of High Sorcery, this poses a problem, as they deem certain races to not be able to handle the power of magic.

Irda: Irda have a natural connection to magic, so it is only natural that they become sorcerers.

Kender: The Wizards of High Sorcery would more than likely hunt down and destroy a Kender 3e sorcerer. They would claim that a Kender is not responsible enough to use magic of any kind, and would be exercising preventative measures.

Gully Dwarves: More than likely, a gully dwarf would destroy himself with his magic. Wizards of High Sorcery would probably hunt down and destroy a gully dwarf sorcerer as well, and call it a preventative measure.

Dwarves: Magic is not natural to dwarves, so they would probably be outcasts in dwarven society. Wizards of High Sorcery would find that dwarves would be quite capable of controlling their own magic.

Third Edition sorcerers sometimes claim that they possess Dragon Blood. In the world of Dragonlance, this presents a few possibilities.

Sorcerers could theoretically take the damage bonus against dragons from a Dragonlance.

Sorcerers might also attract the attention of dragons. Would the dragons look upon them with favor, or would they find them repulsive?

Sorcerers have the opportunity to join the Wizards of High Sorcery, and study magic their way. If they refuse, they can become renegades. They might also be termed renegades from the beginning.

The character race may determine how they are role-played. Irda come naturally to sorcery, dwarves would have problems in society, and kender and gully dwarves would more than likely be hunted down and destroyed, since the Wizards of High Sorcery would deem them a threat.

Sorcerers who claim to possess dragonblood might find themselves in some sticky situations.