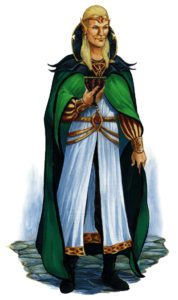 The noble uses the same Base Attack and Saves progressions as detailed on Table 2-4 on p. 51 of the Dragonlance Campaign Setting. Their starting character wealth is 6d6 x 10 stl.

Class Features
The following are class features of the noble.

Weapon and Armor Proficiency: Nobles are proficient with all simple weapons and martial weapons, light armor, and shields (except tower shields).

Bonus Class Skill (Ex): At 1st level, a noble may designate any one cross-class skill as a class skill. This represents an area of study unique to the noble’s background.

Favor (Ex): Nobles are particularly skilled at applying pressure in social situations to get what they want. Whenever a noble uses their Diplomacy skill to change the initial attitudes of nonplayer characters or make requests of a creature they may roll twice and choose the higher result. They can use this ability a number of times per day equal to 3 + ½ their noble levels (to a minimum of one time per day at 1st level).

Wealth (Ex): At 2nd level, a noble can exchange a letter of credit or another campaign appropriate token for an amount of steel pieces equal to 100 x their noble level. This may be done each time the character takes a new noble level. The funds come from the noble’s family, a secret patron, or other appropriate sources. However, the wealth token may only be exchanged in a settlement with a Purchase Limit of 2,000 stl or more per Table 7-36 in the GameMastery Guide.

Career Path (Ex): At 2nd level, a noble must select one of two career paths to pursue: armiger or master ambassador. The noble’s martial or social expertise manifests itself in the form of bonus feats at 2nd, 6th, 10th, 14th, and 18th levels and specialized class abilities at 4th, 8th, 12th, 16th, and 20th levels.

If the noble chooses the master ambassador path they may choose from the following list whenever they gain a career path feat: Alertness, Catch Off-Guard, Charming, Deceitful, Iron Will, Mimic, Persuasive, Skill Focus, Stealthy, and Throw Anything. At 10th level, the noble adds Leadership, Improved Iron Will, and Improvised Weapon Mastery to the list.

Once a noble chooses a career path it cannot be changed.

Call to Arms (Ex): A 4th-level noble who chooses the armiger career path picks a large city, metropolis, or country. Whenever the noble is in the chosen theater of operations he may draw upon a small pool of loyal warriors of identical alignment to assist him in his endeavors. The number of warriors in the pool is equal to the noble’s base Charisma modifier. This number may be increased by permanent magic items such as a headband of alluring charisma, but not by spells or spell-like abilities that temporarily increase the noble’s Charisma, like eagle’s splendor. The total levels of these warriors may not exceed one half of the armiger’s noble class levels.

For example, a 4th-noble with a +2 Charisma modifier could choose to summon two 1st level warriors or one 2nd level warrior while in a theater of operations.

At 8th, 12th, and 16th levels the armiger may add another large city, metropolis, or country to their active theaters of operations, or increase the number of allies that may be summoned in a specific theater by +2.

If any or all of the warriors in the armiger’s pool are killed while in service to the noble, if the armiger is within one of his theaters of operations he can replace them by expending one use of his noble rhetoric ability. All summoned warriors respond to the armiger’s call-to-arms in a minimum of 24 hours, depending on the noble’s location and means of communication, and can be dismissed at any time. They are equipped per the rules in Chapter 14 of the Pathfinder Roleplaying Game Core Rulebook. These warriors do not count against the noble’s total number of followers for purposes of the Leadership feat.

Specialized Retainers (Ex): A 14th level noble who has chosen the armiger career path may now summon men and women with more specialized skill sets to assist them with their endeavors within their various theaters of operations. In addition to being able to summon warriors, the noble may also now summon fighters, rangers, and rogues per all of the normal rules for call-to-arms.

Silver-Tongued (Ex): A 14th level noble who has chosen the master ambassador career path is so skilled at statecraft that once per day, the noble can take 20 on any Diplomacy skill check made to change a creature’s attitude, make a request, or gather information.

Conscripted Forces (Ex): A 20th level noble who has chosen the armiger career path is able to summon a number of temporary followers equal to a character with a Leadership score of 25 or greater (per the rules for the Leadership feat on p. 129 of the Pathfinder Roleplaying Game Core Rulebook) while in an active theater of operations.

The followers remain in the noble’s service for twenty days or three combat encounters, whichever occurs first. If any or all of the conscripted followers are killed while in service to the noble, if the armiger is within one of their theaters of operations and has not exceeded the duration of the initial summons they can replace them by expending two uses of their noble rhetoric ability.

All conscripted forces respond to the armiger’s summons in a minimum of 72 hours, depending on the noble’s location and means of communication, and can be dismissed at any time. They are equipped per the rules in Chapter 14 of the Pathfinder Roleplaying Game Core Rulebook. These forces do not count against the noble’s total number of followers for purposes of the Leadership feat.

Noble Rhetoric: A noble is trained to use oratory to lead, inspire, or intimidate their enemies and allies. They can use this ability a number of times per day equal to 4 + their Charisma modifier. Each round, the noble can produce any one of the types of noble rhetoric they have mastered, as indicated by their level.

Starting a noble rhetoric is a standard action. Once a rhetoric has been activated it lasts for a number of rounds equal to ½ your noble level. It cannot be disrupted, but it ends immediately if the noble is killed, paralyzed, stunned, or knocked unconscious. At each level after 4th a noble rhetoric lasts for an additional 2 rounds per day. A noble cannot have more than one noble rhetoric in effect at one time.

If the noble rhetoric has audible components, the targets must be able to hear the noble for the rhetoric to have any effect, and such rhetoric is language dependent. A deaf noble has a 20% chance to fail when attempting to use noble rhetoric. If they fail this check, the attempt still counts against their daily limit. Deaf creatures are immune to the noble rhetoric.

Inspire Confidence (Ex): A 3rd-level noble can use his rhetoric to inspire confidence in his allies, bolstering them in combat and improving their chances of success. To be affected, the ally must be able to perceive the noble’s rhetoric. An affected ally receives a +2 morale bonus on all saving throws and a +1 competence bonus on all attack and weapon damage rolls. Inspire competence is a mind-affecting ability. Inspire competence can use audible and visual components. The noble must choose which components to use when starting their rhetoric.

Coordinate (Ex): A 5th-level noble can use his rhetoric to inspire cooperation with a single ally. Whenever the noble successfully makes an aid another skill check or special attack as a standard, move, or swift action (depending on the noble’s level), their chosen ally gets a +1 competence bonus on all skill checks with a particular skill or against a specific opponent engaging their ally in melee combat. This is addition to the normal aid another bonus of +2, and it increases by +1 for every four levels the noble possesses after 4th (+4 at 9th, +5 at 13th, and +6 at 17th). A noble cannot coordinate with himself. Coordinate relies on audible components.

Demand Surrender (Ex): A 6th-level noble who has chosen the armiger career path can use his rhetoric to force his bloodied enemies to immediately cease battlefield hostilities. To be affected, an enemy must be within 30 feet, be able to see and hear the noble’s rhetoric, and have had their total hit points reduced to one-half or less. Those enemies affected shift their attitude to Indifferent, drop any items they are holding and stop attacking the noble and his allies until such a time that their attitudes becomes Hostile again. Creatures affected by demand surrender receive a Will save to avoid these effects. The DC of this save is equal to 10 + half the noble’s level + the noble’s Charisma modifier. Any surrendered creatures who are attacked by the noble or his allies automatically become Hostile. Demand surrender is a mind-affecting fear effect, and it relies on audible and visual components.

Castigate (Ex): A 6th-level noble who has chosen the master ambassador career path can use his rhetoric to wear down his rivals’ resolve. To be affected, the targets must be able to perceive the noble’s rhetoric. Victims of the master ambassador’s tongue lashing receive the shaken condition, although they do get a Will save to avoid these effects. The DC of this save is equal to the result of a Diplomacy skill check made by the noble. Castigate is a mind-affecting fear effect, and it relies on audible components.

Instruction (Ex): A 7th-level noble can use his rhetoric to impart his skilled expertise upon an ally. To be affected, the ally must be able to perceive the noble’s rhetoric. An affected ally replaces their total number of skill ranks in any one skill that the noble is trained in with the noble’s. The affected ally also gains a +3 class skill bonus in that skill even if they would normally be considered untrained in it. Once the choice of skill is made it cannot be changed until after the rhetoric ends. The ally still uses their own ability score modifier to modify the skill they are being instructed in. Instruction uses audible and visual components.

Greater Than Oneself (Ex): A noble of 11th level or higher can use his noble rhetoric to inspire greatness in a single willing ally within 30 feet, granting extra fighting capability. For every four levels the noble attains beyond 11th, they can target an additional ally while using this rhetoric (up to a maximum of three targets at 19th level). To inspire greatness, all of the targets must be able to see and hear the noble. A creature inspired with greatness gains 2 bonus Hit Die (d10s), the commensurate number of temporary hit points (apply the target’s Constitution modifier, if any, to these bonus Hit Die), a +2 competence bonus on attack rolls, and a +2 competence bonus on all saves. The bonus Hit Dice count as regular Hit Dice for determining the effect of spells that are Hit Dice dependent. Greater than oneself is a mind-affecting ability and it relies on audible and visual components.