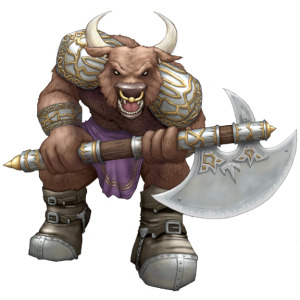 “We have been enslaved but have always thrown off our shackles. We have been driven back, but always returned to the fray stronger than before. We have risen to new heights when all other races have fallen into decay. We are the future of Krynn, the fated masters of the entire world. We are the children of destiny.”

-Land of the Minotaurs
Richard Knaak

Minotaurs are a race of bull-men hailing from the twin islands of Mithas and Kothas in the Blood Sea. They are the chosen of Sargas, the minotaur god of wrath and vengeance, whose form they emulate. They are at home, both on land and at sea, living in an honor-based society where strength determines power.

Minotaurs are the most accomplished sailors and advanced shipbuilders on Ansalon, rivaled only perhaps by the Ergothian empire. Most minotaurs serve aboard a sailing vessel at some point in their lives. Minotaur vessels can take the pounding of the waves, yet move with speed and elegance.

Throughout history, the minotaurs have been enslaved repeatedly. They have been slaves to dwarves, humans, and ogres. Minotaurs will fight ferociously against anyone who would attempt to enslave them.

The minotaurs have thrown off their shackles, rising up to become conquerors in their own right. Minotaurs look upon those who would conquer only Ansalon as shortsighted. The minotaur people believe, as the children of Sargas, they are destined to one day rule the world. All of Krynn is theirs for the taking, a manifest destiny set down by Sargas and the ancient emperors.

Clan names originate with a great hero. His or her descendants take on the name as their own, doing their best to live up to the ideals of their ancestor. Clan names are always preceded by the prefix “Es-” (if the minotaur is from the island of Mithas) or “de-” (if the minotaur is from Kothas) meaning “of”. Thus Kyris de-Entragath is Kyris of Clan Entragath. Those with the “Es-” prefix often consider themselves superior to those with the “de-,” since they see themselves as being closer to the throne.

New naming traditions have risen in the last several decades of colonization, allowing for new prefixes to develop, such as the “ne-” prefix used for the colony of Mitos. Some colonists still use the “Es-” and “de-” prefixes if their lineages can be traced back to Mithas or Kothas. If a minotaur can’t trace his lineage, his clan name remains without a prefix. Such minotaurs are looked down upon for their lack of strong bloodline. Minotaurs who cannot trace their paternal lineage at all, such as an illegitimate child, have the “–Ohn” suffix to their first name, which means “bastard child.” Bas- Ohn Koraf would be an illegitimate child who cannot trace his lineage to either Mithas or Kothas.

Your minotaur character has a number of traits in common with all other minotaurs.

Age. Minotaurs mature at the same rate humans do and reach adulthood around the age of 20. They live longer than humans, however, often exceeding 120 years.

Alignment. Minotaurs are lawful, raised to believe in a strict code of honor. They are loyal to the death to family and friends and implacable adversaries to their enemies. Minotaurs tend toward evil, due to their worship of Sargas.

Size. Minotaurs are taller and heavier than humans, standing well over 6 feet tall and averaging almost 300 pounds. Your size is Medium.

Speed. Your base walking speed is 30 feet.

Keen Scent. You have advantage on Wisdom (Perception) checks that rely on scent.

Menacing. You gain proficiency in the Intimidation skill.

Bull of the Sea. Whenever you make a Strength (Athletics) check related to sailing, you are considered proficient in the Athletics skill and add double your proficiency bonus to the check, instead of your normal proficiency bonus.

Gore. A minotaur may use his horns as natural weapons to make a gore attack. Make a Strength Attack with proficiency. If you hit, the target takes 1d8 + STR modifier piercing damage.

Charge. If you move at least 10 feet straight toward a target and then hits it with a gore attack on the same turn, the target takes an extra 1d8 piercing damage. If the target is a creature it must succeed on a DC 14 strength saving throw or be pushed up to 10 feet away and knocked prone. The extra damage increases to 2d8 at 6th level.

Tough Hide. You have an exceptionally tough hide, granting you a +1 bonus to Armor Class.

Languages. You can speak, read, and write Common and Kothian. A clipped, abrupt language, Kothian is much like the minotaurs themselves – controlled, precise, and harsh.

Trampas “Dragonhelm” Whiteman is best known for co-creating and administering the Dragonlance Nexus fan site. He is co-author of three Dragonlance books – Holy Orders of the Stars, Knightly Orders of Ansalon, and Races of Ansalon. When not evangelizing Dragonlance and other settings, Trampas is a husband, father, podcaster, and web designer. Trampas also enjoys reading comics, reading fantasy and scifi novels, and playing D&D.
View all posts by Dragonhelm →
Tagged  5e, Minotaurs.
Bookmark the permalink.