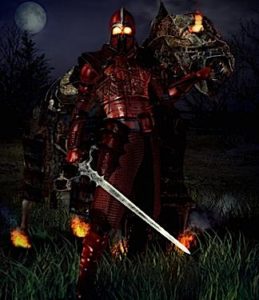 Abyssal Blast (Su): Once per day, Sormshield can unleash a blast of eldritch fire that fills a 20-foot radius spread anywhere within 760 feet. The blas deals 9d6 points of damage. Half of the damage is fire damage, but the rest results directly from divine power and is therefore not subject to being reduced by protection from energy (fire), fire shield (chill shield), or similar magic. A successful DC 18 Reflex save reduces the damage by half.

Aura of Evil (Ex): Stormshield’s aura of evil is equal to his blackguard class level (2).

Detect Good (Sp): At will Stormshield can use detect goodas a spell-like ability, duplicating the effect of the detect good spell.

Fear Aura (Su): Creatures of fewer than 5 HD within 15 feet of Stormshield must succeed at a DC 18 Will save or be affected as though by a fear spell cast by a 9th-level wizard..

Immunities (Ex): Stormshield is immune to cold, electricity, and polymorph in addition to those immunities possessed by undead.

Poison Use: Stormshield is skilled in the use of poison and never risks accidentally poisoning himself when applying poison to a blade.

See Invisibility (Su): Stormshield can see invisible and ethereal creatures as if constantly under the effect of a see invisibility spell.

Smite Good (Su): Once a day, Stormshield may attempt to smite good with one normal melee attack, adding his Charisma modifier (+4) to his attack roll and dealing 2 extra points of damage. If Stormshield accidentally smites a creature that is not good, the smite has no effect but it is still used up for that day.

Summon Mount (Su): Stormshield can summon a mount (typically a nightmare, thought it may be of any other species normally used as a mount). The mount may have no more than 4 Hit Dice.

Once per day, as a full-round action, Stormshield may magically call his mount. The mount magically appears adjacent to Stormshield and remains for 24 hours; it may be dismissed at any time as a free action. The mount is the same creature each time it is summoned, though Stormshield may release a particular mount from service. Each time the mount is called, it appears in full health, regardless of any damage it may have taken previously. The mount also appears wearing or carrying any gear it had when it was last dismissed. Calling a mount is a conjuration (calling) effect.

Should Stormshield’s mount die, it immediately disappears, leaving behind any equipment it was carrying. Stormshield may not summon another mount for thirty days or until he gains another level, whichever comes first, even if the mount is somehow returned from the dead.

Turn Immunity (Ex): Stormshield cannot be turned. He can be banished with holy word, however, just as if he were an evil outsider. (If banished, he is sent to the Abyss.)

Undead Type: Stormshield is immune to mind-affecting effects, poison, sleep, paralysis, stunning, disease, death effects, and any effect that requires a Fortitude save unless it also works on objects or is harmless. It is not subject to critical hits, nonlethal damage, ability damage to its physical ability scores, ability drain, energy drain, fatigue, exhaustion, or death from massive damage. It cannot be raised, and a resurrection works only if it is willing. Darkvision 60 ft.

Lord Venris Stormshield stands 6’5″ tall, and wears the armor of a Knight of the Sword. His armor appears red, as though covered in blood. Stormshield wears a red great helm, with a gold cross in the front. Two red glowing eyes can be seen from the eye slits.

Lord Venris Stormshield was once a respected Knight of the Sword, prior to the Cataclysm. He had become embittered and discontent, as he seemed to not be able to rise in rank. He lacked the physical strength and higher connections to rise to the Order of the Rose. Finding all avenues of advancement blocked, Stormshield became disillusioned with the order, then contemptuous of it.

Stormshield found that he could no longer gain spells, as other Sword Knights could. His thoughts always turned to anger, and his rage overwhelmed him. Turning from the path of good, Stormshield bargained with a Black Robe for potions and elixirs that would increase his strength and preserve his youth.

Together, the Sword Knight and Black Robe discovered notes on an ancient ritual that would lead to immortality. This required the sacrifice of a person of extreme goodness and vitality. So it was that Stormshield set his sights on the Master Clerist that he served under.

Stormshield poisoned and slew the Master Clerist, as well as poisoning the revelers, the minstrel, his retainers and men-at-arms, to keep them from reporting anything of the affair. Finally, he slew his fellow conspirator, the Black Robe.

Stormshield sought to complete the ritual himself that would grant him immortality, drinking the very blood of the Master Clerist. He lay down to sleep, believing that he would awaken to find himself immortal and invincible. He did awake the next morning to a new form of immortality, but not what he had expected.

Stormshield discovered soon enough that he was a death knight, his armor covered in the very blood of those whom he had slain. The god Kiri-Jolith had cursed Stormshield to live an immortal life, where he was painfully reminded of his heinous crimes. Every night, the spirit of the minstrel, Kelton Songsmith, sings of Stormshield’s tale.

His punishment only served to anger Stormshield further, and his heart cried out for vengeance. So it was that the god Sargonnas made Stormshield his servant from time to time.

Stormshield has recently heard of the cleric, Mina, who is said to have killed two other death knights – Lord Soth and Lord Ausric Krell. Stormshield worries that he may be next.

The keep is set back on a natural ledge and presses against the flank of Stormshield Mountain about three-quarters of the way to the top. The trail is overgrown and broken, making travel to and from the keep difficult. The castle itself has an air of forlorn neglect and somber sorrow. Both the trail and the stones of the keep are uniformly grey and slick from the drizzle of storm clouds that weep continuously upon the crown of the mountain. A smell of rot and decay lingers in the area, and the air is always chill. Thunder and lightning are continuously in the air.

It is said that the spirit of the Black Robe haunts the halls of Sorgaard Keep, never resting until the death knight is destroyed.

The author would like to thank WildKnight from the Dragonlance.com message boards for suggesting this conversion.