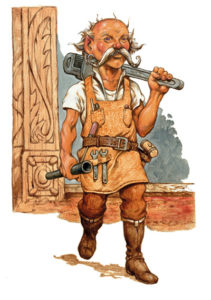 Tinker Gnomes
Tinker gnomes have all of the tinker gnome racial traits listed in Chapter Four of Races of Ansalon except as follows:
+2 Dexterity, +2 Intelligence, -2 Wisdom: Gnomes are small and skilled with their hands and extremely intelligent. However, they often put their quest for knowledge ahead of any consequences.
Small: Tinker gnomes are Small creatures and gain a +1 size bonus to their AC, a +1 size bonus on attack rolls, a -1 penalty to their Combat Maneuver Bonus and Combat Maneuver Defense, and a +4 size bonus on Stealth checks.

Mad Gnomes
Mad gnomes (or “thinkers”) have all of the mad gnomes racial traits listed in Chapter Four of Races of Ansalon except as follows:
+2 Dexterity, +2 Intelligence, -2 Charisma: Mad gnomes are just as bright and nimble as tinkers, but are driven by a single-mindedness that makes them very difficult to get along with.
Master Tinker: Mad gnomes gain a +1 racial bonus on Disable Device and Knowledge (engineering) skill checks. They are treated as proficient with any weapon they have personally crafted.

Wild Gnomes
Wild gnomes have all of the tinker gnome and wild gnome racial traits listed in Chapter Four of Races of Ansalon except as follows:
+2 Constitution, +2 Intelligence, -2 Charisma: Wild gnomes are hardy and intelligence, however, their tendency to treat others as case studies makes them less socially gifted.
Healthy: Wild gnomes gain a +4 bonus on Fortitude saves against disease and poison, including magical diseases.

Half-Gnomes
Half-gnomes have all of the racial traits listed in Chapter Four of Races of Ansalon except as follows:
+2 to One Ability Score: Half-gnome characters get a +2 bonus to one ability score of their choice at creation to represent their varied nature.
Single-Minded: Half-gnomes gain a +2 racial bonus to any one skill chosen at 1st level. This skill is always considered a class skill for the half-gnome. However, he must keep his skill ranks in this skill maxed out at all times or incur a -2 penalty to all other skill checks. A half-gnome with this racial ability does not have the Jack-of-All-Trades racial ability.
Jack-of-All-Trades: Half-gnomes treat all skills as class skills, but may only have a number of skill ranks equal to half their Hit Dice in any skill. This ability replaces the class skill list of a half-gnome’s classes. A half-gnome with this racial ability does not have the Single-Minded racial ability.