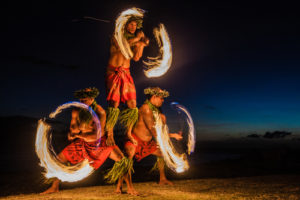 “Fire is more than flames. It is our inner passion and creativity seeking to grow from a tiny spark to a roaring blaze.”
-Yoranda Ek Zhira, Firedancer of Sirrion

The Firedancers of Sirrion are a traveling troupe of performers who specialize in firedancing. The Firedancers convey the messages of creativity, passion, and renewal within their performances. Through a series of firedances, they tell many tales, including The Passion of Sadda, a tale of a prince of Khur who finds love and a new life with a commoner’s daughter.

Firedancers express their passion in their art. Each time they perform, they give their all into the performance. Though they practice daily, each night’s performance is different. They strive to bring about inspiration, the catalyst of which may be different for each locale they perform in. Though improvisation with fire can be dangerous, the Firedancers have perfected it into an art form.

The Firedancers of Sirrion are a nomad troupe under the leadership of Alakar al’Shar from the Mikku tribe. Alakar, a cleric of Sirrion and a talented firedancer, keeps his troupe moving in caravan fashion. The Firedancers typically fill one of several roles – firedancer, musician, storyteller, and so on. Roles often overlap, so that a person who is playing percussion one performance may be twirling flame the next.

The Firedancers of Sirrion stay within the borders of Khur, traveling the desert lands from town to town, and tribe to tribe. The Firedancers are very observant of tribal customs and know in which lands they are welcome and which ones they are not.

The Firedancers follow the troupe leader, who is always the most talented and charismatic of the Firedancers.

The Firedancers of Sirrion, originating from the Mikku tribe, consider the Mikku to be the greatest of their allies. Other tribes will be allies on occasion, though it varies from tribe to tribe. The Firedancers currently hold favor with the Khan of Khur, though they know that this may change if the Khan gets bored with their performance.

The Firedancers have few enemies, though the Torghanists, Khurish followers of Sargonnas, are among their number. The Torghanists do not take kindly to the negative portrayal of their faith in Firedancer performances.

Those who join the Firedancers of Sirrion are often those who display talent for firedancing. Typically, a student will approach the Firedancers, asking to train. Under the supervision of a master, the apprentice will learn the art. Training begins without fire at first, then fire is added on afterwards. After a year, a student must perform a firedance for Alakar himself. If Alakar deems the student worthy, he may officially become a Firedancer. Those who aren’t worthy yet are given a second chance after another year’s study. If the student fails again, he is expelled from apprenticeship.

Costs and Benefits of Membership

The primary costs of membership are time in training, as well as firedancer equipment (poi, staff, fire hoop, batons, fire stick, fire meteor, torch, fire-knives, chi ball, fans, finger wands, palm torches, fuel, etc.). Membership can have its benefits as well, such as protection in the desert, making coin, and the favor of Sirrion.

Most followers of Sirrion are those who focus on performance, though some clerics of Sirrion have taken up the art as well. It is rare for a bard to join, though one sees it from time to time.