End of a Legend 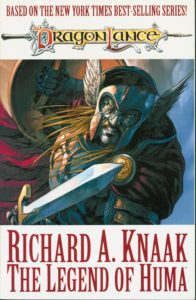 Working as the script writer for the comic adaptation of The Legend of Huma was a dream come true. It was the best of worlds for me, combining my love of comic books and the world of Dragonlance. Above all, it was the adaptation of one of my favorite Dragonlance novels.

Richard Knaak weaves us a tale that is mythical in proportion. The Legend of Huma is the “Arthurian legend of Dragonlance”, a classic tale, mythic in proportion, that would last through the ages.

Huma, like many Dragonlance characters, comes from humble origins. A lowly Knight of the Crown who looked towards Bennett as the shining example of what a knight should be, yet he proves that he already knew in his heart what it means to be a knight.

Huma is a man of true honor, a bond that he shares with the unlikeliest of friends – Kaz the minotaur. Through their travels, Huma teaches Kaz lessons that would change his life forever.

Huma’s legend also centers around the wizard Magius, a Wizard of High Sorcery of great power and potential who fears a vision of the future in which he dies. Magius undergoes many changes throughout the novel, eventually conquering his inner demons, even at the cost of his life.

The last of Huma’s companions is Gwyneth, secretly known as the Silver Dragon, or Heart. Her part in the story is perhaps the most tragic, as she and Huma love one another, yet must sacrifice it to banish evil.

Their adventures and fight against the forces of Takhisis, including the renegade wizard Galan Dracos and his general, Crynus, truly is what legends are made of.

To take what was already a masterpiece and to help bring it into visual reality has been one of the greatest experiences of my life. The Dabel Brothers gave me an opportunity, one that I will always be grateful for, to take this novel that I have such love for and to present it in a medium that I equally love.

Plus, I got to work with a great creative team, one interested in producing the best product that we could. While all those involved all contributed something great, three names really stand out.

Mike S. Miller set down the visual foundation for Huma. His incredible talents shaped Huma into the beautiful series that it was.

Also, I owe a debt of gratitude to Sean J. Jordan who served as mentor, editor, and co-writer. Sean taught me the craft, showed me how to present a novel in comic book fashion, and overall made me into a better writer.

And, of course, Richard Knaak, who was always there when I needed him. I know Richard was as excited about this project as I was.

I have many fond memories of my time writing the adaptation. I remember that initial joy when the Dabel Brothers brought me on. Seeing my name on the cover of a comic book right under Richard Knaak’s name was marvelous as well. Above all, I enjoyed working with a great group of friends.

Regrets? I would say my only regret is that we never got to finish the story. I had many scenes in my mind that would appear later in the comic. So perhaps it would be best to leave you with the final scene that never was.

The final scene, as in the book, would be that of Kaz leaving the medallion of faith on the tree branch, and riding off into the horizon. This would have been a splash page, and the first one in the entire series showing a bright blue sky, rather than the constant overcast throughout the series. The ghostly image of Huma smiling would be prominent in the sky, with Gwyneth in human form clinging to his arm, looking lovingly at Huma. Magius would have been a bit more in the background, holding the fabled Staff of Magius, the sun sitting atop the staff as if it were the shining crystal.

Thank you, my friends, for allowing me this opportunity to present to you one of my favorite stories. While I’m saddened that it has come to an end, I’m proud of the work that I’ve done. I hope that all of you enjoyed this journey as much as I have.

I forgot one little detail in that splash page, the final words uttered by Kaz.

Trampas “Dragonhelm” Whiteman is best known for co-creating and administering the Dragonlance Nexus fan site. He is co-author of three Dragonlance books – Holy Orders of the Stars, Knightly Orders of Ansalon, and Races of Ansalon. When not evangelizing Dragonlance and other settings, Trampas is a husband, father, podcaster, and web designer. Trampas also enjoys reading comics, reading fantasy and scifi novels, and playing D&D.
View all posts by Trampas "Dragonhelm" Whiteman →
Tagged  Comics.
Bookmark the permalink.