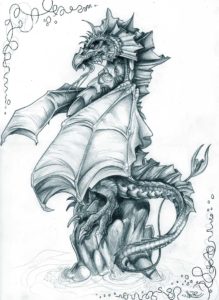 In “real” mythology, dragons are more than just big lizards with bad breath – they are representative of, well, many things really but in Western mythology they are our dark side, the Id or the Shadow, to borrow terms from Freud and Jung. The tale of St. George and the Dragon, for example, has been called a Christian allegory for triumph over the Devil (the Dragon in this case). This tale is probably a re-working of Scandinavian dragon-slaying tales, where the hero vs. dragon motif appears the most. The dragon usually represents desolation, and the slaying of the dragon returns fertility and wealth to the kingdom (these same tales are probably used as sources by Tolkien).

Of course, in Eastern mythology, especially Chinese, dragons appear as wise sages and heavenly bureaucrats. They are the great powers that drive the universe at the behest of the celestial Emperor, and are merely forces rather than necessarily good or evil. As a rule they tend towards benevolence, however.

Dragonlance, having arisen from AD&D, sometimes suffers from reducing the dragons to mere game statistics rather than implacable forces of nature or the psyche. To redress this balance, I have assigned each color of dragon a trait that it represents. This in turn dictates the way that the dragon will behave. The dragons have no choice in this – they don’t have the trait, they are the trait. It would be impossible for a chromatic dragon to repent its evil ways, because it would then cease to be what it was.

The suggested traits are inspired by the behavior of examples of each dragon type presented in the adventure modules, the original trilogy of books and the Dragonlance Adventures hard-back book.

The metallic dragons are also personifications of personality traits, but higher and more noble ones than the chromatic dragons. One problem with the metallic dragons is that they can “fall from grace”, mainly by over-expressing their particular trait.

Since draconians are formed from metallic dragons, it makes sense to give them personality traits that are the opposites or perversions of the equivalent metallic trait.