Draconian Feats for the Holidays 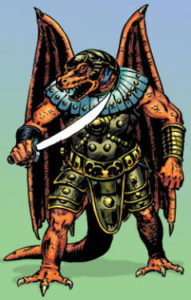 Here’s a little holiday treat! Jamie Chambers sent us a list of Draconian feats that were cut from his article in Dragon #315, which should provide some cool new options for draconian characters.

Formed from the eggs of good, metallic dragons and corrupted by dark magic rituals, draconians were first created as shock troops in the War of the Lance. Regarded for years as irredeemable and worthless by the other races of Ansalon, the all-male race was doomed to extinction until a group that had once been the First Dragonarmy Draconian Engineering regiment (under the leadership of Commander Kang) made the most important discovery in their history-the eggs containing female draconians.

After strengthening their numbers by meeting other survivors of the war, Kang led his people to Teyr and founded the first draconian nation. The countries of Ansalon have not known how to react to draconians as a true race with a sovereign nation. A group of draconians from Teyr fought against the Dark Knights of Neraka at the conclusion of the War of Souls, leaving many wondering just who the dragon-men will ally themselves with, and who they will call enemies.

Draconians as player characters are first introduced in the DRAGONLANCE Campaign Setting by Wizards of the Coast, with both the Baaz and Kapak draconians included as available PC races. That volume also includes several feats specific to draconian characters. A third draconian breed was recently detailed as a PC race in Dragon Magazine Issue #315: the spell-wielding bozak draconians. Included here are new feats give further options for draconian characters to enhance their innate racial talents.

Most of the feats listed below are available to draconian characters only, or even a specific type of draconian. Draconians can make use of most standard feats from the core rules, as well some "monstrous" feats from other sources.

You have suffused your blood with acid, so that small amounts spray your enemies when they strike you with edged weapons.
Prerequisites: Kapak draconian, Con 15, Fort save +6
Benefit: When you take damage from a slashing or stabbing weapon from an enemy in an adjacent square, the enemy must make a Reflex save [DC 10+1/2 kapak HD+Con modifier]] or take 1d2 points of acid damage.

Your metabolism is slowed to the point where you no longer need to consume food or water to survive.
Prerequisites: Dragon creature type, Con 17, low metabolism extraordinary ability.
Benefit: You do not suffer from the effects of starvation or dehydration unless they are inflicted magically.
Normal: Creatures with the low metabolism extraordinary ability can survive on one-tenth the food and water it takes to sustain a human.

Your saliva has increased potency.
Prerequisites: Kapak draconian, Con 13, Fort save +4
Benefit: The effect of your saliva is increased to a die-type of d8. A male kapak delivers initial and secondary damage of 1d8 each with his poison attack; a female kapak heals 2d8 points of damage.
Normal: Male kapak draconians deliver a paralyzing poison (bite or licked blade); [DC 11 + Constitution modifier] Fort save; initial damage 1d6 Dex, secondary 1d6 Dex; female kapaks can lick a wound to heal 2d6 points of damage.

You have strengthened your wings and learned the basics of flight.
Prerequisites: Draconian, Str 15, Dex 13, improved glide, glide extraordinary ability, Reflex save +8
Benefit: You gain a fly speed of 1 1/2 times your speed on the ground. You have a maneuverability of Clumsy.

Your saliva is extremely potent.
Prerequisites: Kapak draconian, Enhanced Saliva, Con 15, Fort save +6
Benefit: The effect of your saliva is increased to a die-type of d10. A male kapak delivers initial and secondary damage of 1d10 each with his poison attack; a female kapak heals 2d10 points of damage.

Your blood has become so acidic it causes even more damage to your enemies.
Prerequisites: Kapak draconian, Con 17, Acidic Blood.
Benefit: When you take damage from a slashing or stabbing weapon from an enemy in an adjacent square, , the enemy must make a Reflex save [DC 10+1/2 kapak HD+Con modifier]] or take 1d4 points of acid damage.

By running on all fours and using your wings, you can move at amazing speed.
Prerequisites: Dex 13, Draconian, gallop extraordinary ability
Benefit: You must have your hands free, your wings unhindered, and must be wearing light or no armor and carrying no more than a light load to gain the benefits of this feat. When running on all fours with your wings spread, you may run up to 6 times your normal speed.

Prerequisites: Dex 13, glide extraordinary ability
Benefit: You may extend the duration of a glide by 1 additional round for every 2 points of Dexterity bonus. Every round the glide continues after the first you may maintain an elevation from 20 to 40 feet (your choice each round) and move horizontally up to 2 times your normal speed. You have a maneuverability of Clumsy or that of your flying movement (whichever is greater).
Normal: A glide negates any damage taken from a fall and allows horizontal travel up to 4 times the vertical distance descended.

You can temporarily make your flesh stone-like in appearance and toughness.
Prerequisites: Baaz draconian, Con 17, Hardened Flesh, Great Fortitude, Fort save +8
Benefit: You have learned to release a flood of the arcane chemicals within your body just short of what will occur with your death throe. You gain Damage Resistance 5/adamantine.