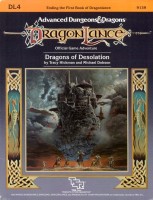 The draconians have now conquered the civilized lands to the north. You have led a struggling, starving band of refugees out of slavery-but freedom and safety lie over an impassible mountain range! There is only one way to safety: find the doors of the ancient dwarven kingdom of Thorbardin, and persuade the rulers to let the refugees pass.

What price will the dwarven thanes ask? Can you succeed in your mission before the draconians destroy the hidden camp of the refugees?

“Dragons of Desolation” is the fourth Dragonlance adventure for use with the AD&D game system, and concludes the first book of Dragonlance. You can play this adventure by itself or as part of the grand quest that spans the entire Dragonlancestory.