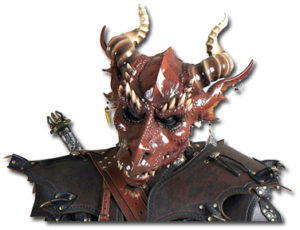 Editor’s Note: Margaret Weis received the following letter from a fan, and thought she would share it with the rest of the community. Enjoy!

A few years ago, I had the honor of meeting Margaret Weis at a book signing of ‘Mistress of Dragons’ at the Barnes and Noble Book store in San Jose California. I told her what a big fan me and my buddy Phil were on the draconians and their stories as in ‘The Doom Brigade’. I told her about how my buddy Phil and I were working on a dragon costume inspired by the draconians, so she gave us her E-mail and asked us to send some pics when we finished.

We finished our creation, and sent her some pictures of our dragon creation ‘Scabrous Vermicelli, Mercenary for hire. No job too big, it just costs more—*TOOTHY DRAGONISH GRIN*’

Heck, Scabrous even offered Margaret to be her bodyguard if she did another book signing in the San Francisco Bay Area. He is a Mercenary after all. 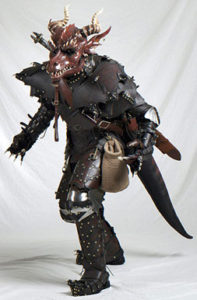 This is Phil’s first costume. He designed, molded, cast, and painted all the dragon parts from beginning to end.

The Method—The head has 69 individual peaces. It took over a year to make Scabrous, especially since we were learning the techniques of mold making and casting on the fly. The originals were made from Oil based clay, the molds were Silicon (the most awesome mold material in the world), and the final was Epoxy Resin.

The cost—well let’s just say, more than most people would want to spend.

The Reason—Wait until you get out in public and !!RAR!! at people and watch their brains crash, you will find out how much fun it is. We will see kids of 5 years old, up to rough and tough Harley dudes just in speechless awe when Scabrous gives them the eye. It’s a blast.

We have had fun with him, and I hope you enjoy him also!