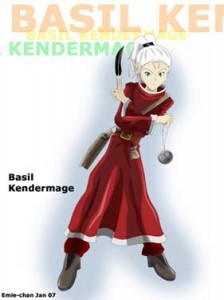 bracers of armor (imbued with the mana shield power: +4 Toughness), (2) potions of healing (imbued with a single use of the cure power pre-set power check of 10); silver medallion of faith (Gilean and Lunitari); Wealth: + 15

Basil is a unique kender. He has snow white hair, cat-like green eyes that allow him to see in conditions of low-light. He wears a worn traveler’s outfit and black hooded cloak. He keeps the hood pulled up most of the time, especially when he doesn’t want to talk to anyone. He has a habit of speaking in a raspy whisper; having discovered a number of years ago that this gets peoples attention. Basil comes off as a very obsessive individual. He is fascinated with the life and exploits of the famed Raistlin Majere and seeks to walk in his footsteps. Basil sees himself as the inheritor of Raistlin’s Legacy. He plays his cards very close to the vest and seems a bit enigmatic. One moment he may be kind and caring the next he reacts with wrath and a spell on his lips. He does not often share what he knows with others, preferring to either save the day at the last second with a sudden insight, or just to let his companions figure things out for themselves; much as he was forced to do. It is often the latter.

After his test, the 57 year old Basil is a changed man. He has come to realize that he has a choice as to whether he will be his own man or continue to live in Raistlin’s shadow. He is still tempted by the darkness, but knows he can’t walk fully in the light. He realizes that he has done some terrible things in his life and wishes to make amends for them. His actions during the Test, rewarded him with the red robes and attracted the attention of Lunitari who saw much potential in the young kender and made him the first of her Moon Disciples since the Chaos War

Basil was always fascinated by magic even when he was a young kender growing up in Kendermore. His mother was a cleric of Gilean who took to teaching young kender at the library of Kendermore. Like other kender, Bail engaged in handling, but the source of his curiosity wasn’t odd trinkets, it was books. He read anything he could get his hands on, but was especially fascinated by stories of magic. Basil dreamed of one day becoming a wizard and traveling to the Tower of Wayreth to take his Test of High Sorcery and thereby join the elite magic users of the world. The coming of Chaos would spell the end of these dreams or so he believed.

A few years after the Chaos War, a monstrous red dragon named Malys devastated the Goodlund Penninsula when she claimed the territory for her own. She set her sights on Kendermore and destroyed the city. During the attack, Basil was separted from his mother and witnessed the great red fly over head. His hair turned white as ice and his eyes changed to appear cat-like. The only thing he wanted to do is disappear; so he did; and immediately feel unconscious.

Basil awoke some hours later in the ruins. A dwarf with gold skin and silver hair sat near him on a piece of broken building. The dwarf helped Basil into one of the now abandoned buildings and the two talked for hours. The dwarf who called himself Verash explained to Basil that he had tapped into the wild magic of the world and used it to turn invisible. Basil was full of questions, which the strange dwarf endeavored to answer. Basil wasn’t curios about the magic for any half-remembered dream, he wanted to master it and turn it on the red dragon that had destroyed his home. Over several days, Verash taught Basil how to access the magic without completely exhausting himself. On the morning of the forth day, the dwarf disappeared.

Not a soul lingered in Kendermore, beside himself. Basil scoured the ruins of Kendermore and gathered some serviceable gear before setting off on the rode. It would be nearly a year before he would see another kender. Basil used his magic to take what he wanted but couched in the use of fake magic items, such an oak stick he claimed was a magic staff. In time he would travel to the Academy of Sorcery near Solace and become a student.

During his time at the Academy, Basil would discover what would become his life long obsession. Rasitlin Majere. He spent lots of time in the Academy library researching the archmage. His professors deemed his obsession unhealthy and forbade him to do any more research. Basil broke into the library, snatched a few texts on Raistlin, and then fled the Academy in the dead of night.

It is unknown what happened to Basil between this point and the end of the War of Souls, but something caused his attitude to take a turn for the worst. He next turned up again in Pashin in the winter of 422. He was traveling through Khur, having heard rumors of a Red Robed Wizardess in Ak-Khurman administering the Test of High Sorcery to aspirants, and had stopped for a few days of rest at the Wounded Crow in Pashin. A group of adventures approached him asking him if he could decipher some runes on a music box. He agreed on the condition they act as his bodyguards for the duration of the trip. He was making the transition from sorcery to wizardry and could not rely on his magic to protect him.

During the trip to Ak-khurman, Basil was befriended by a kender sorcerer named Tarli, who gave him a lot to think about. He accidentally killed another kender traveling with the group through incautious use of his magic, and earned the ire of the adventurers. An encounter with the barbarian in the band would have led them to part ways in Ak-Khurman were it not for the machinations of the caretaker of Khurman Tor, Zoe Left-Hand.

Zoe had been watching the kender for many months and conspired to bring the band of adventurers into Basil’s Test. Basil’s test began with he and the adventures walking the path of the Heroes of the Lance in Nightmarish Silvanesti. Basil was given the same temptation Raistlin was and jumped at the chance. The setting then morphed to Kendermore just days before it was to be destroyed by Malys and Basil was forced to relive some of his darkest days and the choices he made during them, including a repeat of the accidentally killing with magic. The last part of his Test did not include his companions and thus no one save Zoe and Basil know what occurred. The end result was Basil gaining his red robes.

Basil would appear again to help his friends fight off an undead horde in Wulfgar, and assist them with securing the Dragon’s Graveyard. He even survived the final battle with the Aspect of Chemosh. Currently he is in Ak-Khurman assisting Zoe Left-Hand.

I have used the d20 skills in most cases because I believe they are a better fit than the skills in True20.