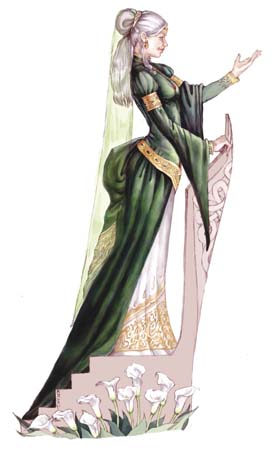 “Master Ambassador” by Jennifer Meyer. Permission given to use this image from Margaret Weis Productions.

The ambassador represents the individual who has the ability to conduct sensitive diplomatic missions, handle difficult negotiations, and formulate effective government policy – all skills that are highly valued in a war-torn world. Such a person may be the representative of princes in foreign lands and often hostile courts. He may be acting in the interests of his liege or for his own ends, if the ambition of the ambassador eclipses his loyalties. Whatever his cause, his skill in diplomacy remains keen.

All ambassadors are experienced in political intrigue, in drafting agreements and treaties, and in understanding a foreign mindset. The ambassador has the ability to lead a kingdom to riches or into ruin with the turn of a phrase.

Ambassadors are ideal adventurers because they are always being sent to other lands and regions to engage in diplomatic missions or to act in the service of their liege lords. NPC ambassadors are often found in foreign courts manipulating the affairs of local nobility or representing a nation’s interests in times of crisis.

Skill Proficiencies: Insight, Persuasion
Tool Proficiencies: One type of gaming set.
Languages: Two of your choice.
Equipment: A set of fine clothes, a signet ring, a letter of introduction from your sovereign, and a purse containing 25 stl (gp in other worlds).

As an ambassador, you are assigned to one or more embassies in foreign lands. You are intimately familiar with the political arenas to which you are assigned, and have learned to adjust to the unique customs and quirks of courtly life. Even in times of war, conflict, and revolution, you and your companions may find refuge here. Your DM will provide you information on the number and locations of your embassies, and courtiers with which you have contact.

While at a favored embassy, you and your adventuring companions can be expected to be served by your retinue, the embassy’s support staff consisting of aides, bodyguards, experts, and advisors. You have diplomatic immunity while at your embassy, for as long as the nation it is in honors that.

An ambassador needs to be receptive to new and different ideas, cultures, and beliefs in order to have any success in their careers.

Trampas “Dragonhelm” Whiteman is best known for co-creating and administering the Dragonlance Nexus fan site. He is co-author of three Dragonlance books – Holy Orders of the Stars, Knightly Orders of Ansalon, and Races of Ansalon. When not evangelizing Dragonlance and other settings, Trampas is a husband, father, podcaster, and web designer. Trampas also enjoys reading comics, reading fantasy and scifi novels, and playing D&D.
View all posts by Trampas "Dragonhelm" Whiteman →
Tagged  background.
Bookmark the permalink.